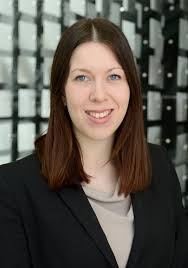 Emily Murrell works in External and Corporate Relations for the World Bank Group (WBG), based in London. Emily manages relationships with UK stakeholders in the international development space, including the UK Government, Parliament, CSO’s, and academia. Emily is the WBG’s UK lead on climate change, biodiversity, and sustainable finance and, alongside other multilateral development banks, is helping to prepare for the landmark COP26 Summit in 2021.

Before assuming her current role, Emily was Head of Sustainable Finance and Future Cities Policy in the Group Public Affairs function at HSBC’s Global HQ. She spent three years helping the bank to implement the SDG’s and the Paris Agreement, working to decarbonise their large global portfolio. She advised individual clients, for instance in the automotive and energy sectors, on how to accelerate their transition towards the low carbon economy. Emily has also worked with the UK Government and the European Commission to create an enabling regulatory environment for sustainable finance and was appointed Co-Head of the International Chamber of Commerce Sustainable Finance Working Group, representing the banking sector in the world’s largest business organisation.

Emily joined HSBC from the UK Civil Service, where she worked in the Department of Energy and Climate Change and in the Cabinet Office. She was a member of the UK international climate negotiations team for the COP20 Climate Summit in Lima and worked as a Senior Policy Advisor focused on EU and international climate change and energy policy in the Cabinet Office in the run up to COP21 and the UN General Assembly where the SDG’s were agreed.

Emily has a BSc in Social Policy with Government from London School of Economics and an MA in EU International Relations and Diplomacy from the College of Europe in Belgium. Emily is half French, half British, and lives in central London with her husband. A self-confessed ‘climate geek,’ Emily enjoys good food and good coffee, long country walks, and (in the absence of global pandemics) loves exploring the world.