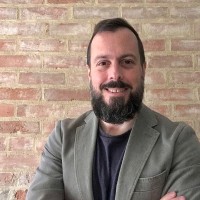 Cristian Parrino is a social entrepreneur with a commercial and innovation background, rooted in the technology and sustainable development sectors. He is an advisor and mentor to organisations enabling an inclusive and regenerative economy on idea incubation and acceleration, program development, systems change design, partnerships and coalitions, fundraising and scale strategy. Cristian is multilingual (English, Italian, Spanish) and has extensive business and cultural experience across the United States, Europe, Latin America and China. He is currently CEO and Co-Founder of Greengame, an award-winning tech for good startup that works with cities, universities and businesses to incentivise sustainable behaviour by combining automated activity detection, gamification and behavioural economics. Greengame is the creator of the Sustainable Cities Tournament launching in 2021. Cristian is also a Trustee for InterClimate Network, which engages young people with the challenges of climate change and inspires them to take action in their own future.

Prior to Greengame, Cristian was Interim Director – Innovation and Reach at Keep Britain Tidy where he led an award winning behavioural research and innovation program, focussed on co-developing solutions to waste and litter with Local Authorities and corporates in the UK. Cristian has extensive experience acting as Entrepreneur in Residence, most recently for the United Nations Global Compact’s Youth SDG Innovation Programme and previously at StateZero Labs, Blockchain for Social Impact Accelerator, the Collective Accelerator and the Thought for Food Challenge.

Cristian started his career with Iridium, a US-based global satellite telephony network created by Motorola in partnership with several telecommunications carriers around the world. After initially supporting the board with marketing and investor relations, he moved to South America to run market development and mobile operator partnerships in Argentina, Bolivia, Uruguay, Paraguay and Chile. He returned to the US to lead marketing and partnerships for wireless tech startup Spike Broadband Systems, developing connectivity solutions for people in remote areas or financially excluded. He then moved to the UK in 2003 to help British Telecom build its Innovation Hub and the first tech startup accelerator in the country, after which he went on to build Chef2video, a tech startup which focussed on getting people to socialise around making healthy food at home, using streaming video and community support. Cristian then joined Canonical to lead the mobile program for Ubuntu, the Linux Operating System, where he broke crowdfunding records worldwide with the Ubuntu Phone in an attempt to take on the dominating power of Google and Apple.

Cristian has an MBA from the University of Surrey and a BA in International Affairs from the George Washington University. He has two sons with whom he lives in Suffolk, enjoys cooking healthy food, walks along the coast and is trying to learn Mandarin in his spare time.