9.10am on a sunny Tuesday morning in East London. 120 of the William Torbitt Primary School Year 6 pupils descend on the school hall and sit down in tidy rows on the wooden floors, anticipation and slight uncertainty on their faces.

It is their first assembly, four classes sharing the same space, in the last two years. A sense of novelty can easily be recognised not just among the pupils, but in our own team too. It is also our first assembly since the pandemic began.

As the assembly starts and we begin to include some questions and conversations, the children’s hesitation fades. Hands shoot up in the air, opinions are shared, and vast knowledge is revealed. The pupils show how aware they are of the climate crisis and the environmental problems around them. They tell us what they know about carbon footprint and biodiversity and how composting works. When we wrap up the assembly and the children leave to change their footwear, their faces are beaming with excitement and their voices reveal it too, as the children exclaim, “Thank you! See you soon!”.

Year 6 are children on the verge of adolescence, and they are a tough crowd to impress. So, when they arrive at their Tiny Forest with the sun shining in their faces, I am delighted to see they are ready to pick up the spades and get to work planting their legacy forest. Over the rest of the morning, they get to plant native trees in the unforgiving urban clay soil, and investigate the soil properties in and around their forest. The soil classification protocol is a funny one, requiring the children to make strange shapes that get them giggling and joking around, suddenly connected to their environment, coats hung up on the wooden fence, hands muddy.

It is endearing watching these children, raised in an urban environment, pinching soil and using descriptive language to talk about the texture.

I can see myself in them, hesitant to get my clothes or hands dirty. However, with the prompts of the soil classification protocol clear and directive, a switch flicks on. As I lead the activity, it makes me leave my urban child dignity behind and encourages me to connect with the environment around me through my senses. 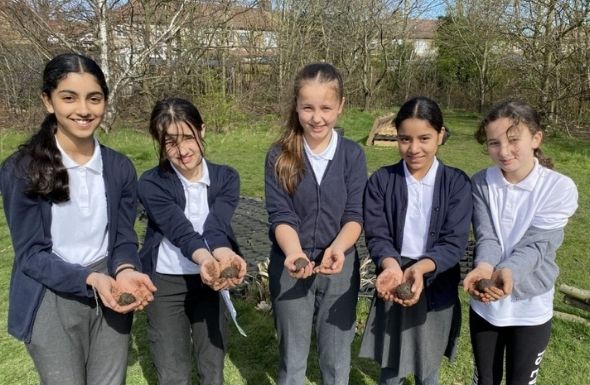 Meanwhile in the forest, the children and staff members work as a team. The soil is so tough to dig, even the adults are struggling. I find it revealing that at one point a team member and two children attack the same patch of land from three different angles with their spades, as the hole must fit all the roots of the tree laying by their feet. 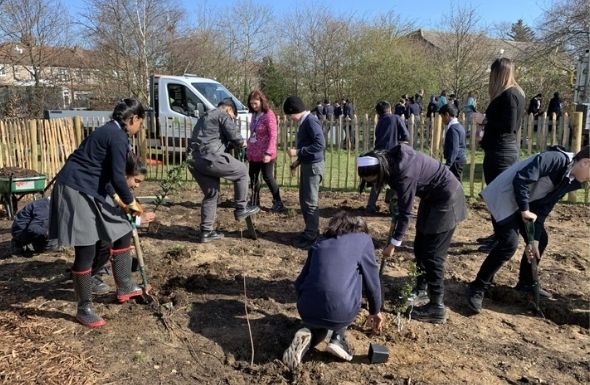 Having 21 different species planted at this site is a gift, as it starts many fascinating conversations about the trees, with the children spotting differences in the colour of the stem, the buds, and how expansive the roots are. We also talk about compost and nutrients in the soil, as the children get used to the distinctive Tiny Forest compost smell and begin to wonder how to provide the best growing conditions for their forest. The Year 6 pupils really take ownership as they welcome Year 3 and 4 pupils to the forest in the afternoon, supporting the slightly hectic planting and acting as the stewards of the site. The children are running, not walking, to pick up another tree, and another…

As the end of the school day nears and the site gradually empties out with only staff members remaining, we breathe out a sigh of relief. A busy day has finished, and all 600 trees found their spot in the forest. A few energetic Year 1 pupils from the afternoon Forest School club come along to spread some mulch, and their quick hands and feet attack the pile of mulch at the edge of the forest with vigour. It has definitely been a day to reflect on.

Hundreds of children found a connection to this plot of land in a single day, and felt a sense of power in taking action for their local environment.

We hope the Year 6 pupils will come back to visit their primary school years from now, and find a serene, lush and magnificent forest, just as they described a forest to be during assembly just that morning. 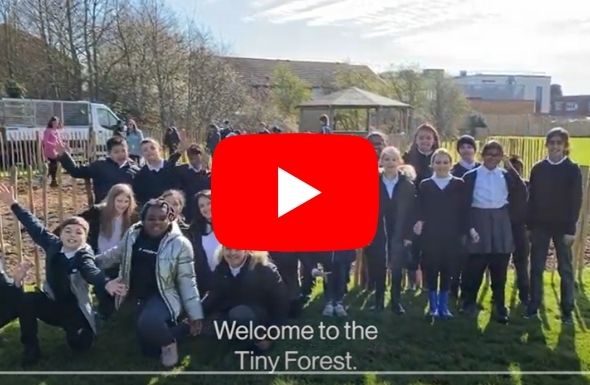