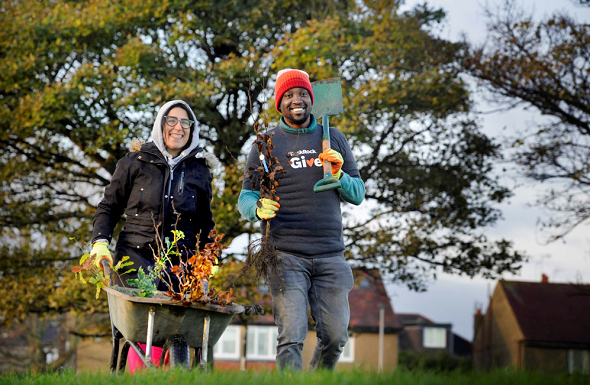 BlackRock is committed to creating positive social impact in the communities where it operates. Guided by the belief that sound environmental management is key to building more resilient and sustainable local communities, BlackRock partnered with Earthwatch Europe by engaging employees in the Tiny Forest programme to address biodiversity loss and the effects of climate change on communities.

Driven by the firm’s employee-led Green Team Network, BlackRock’s proposal to plant two forests in Scotland and two in London aligned with the Tiny Forest mission to provide opportunities to access green space to communities across the UK, facilitate time spent in nature and inspire a life-long relationship with the environment. For BlackRock, with offices in Edinburgh and London, the initiative provided their UK-based employees with opportunities to volunteer with colleagues who share a commitment to advancing a more sustainable world.

BlackRock funded one of eight Tiny Forests planted in Glasgow the week before the city hosted COP26 (the 26th UN Climate Change Conference of the Parties) in November 2021, a landmark climate conference that brought together delegates from nearly 200 countries to focus on climate action and solutions. Three other forests funded by BlackRock have been planted in Edinburgh, Thamesmead, and Ealing, with BlackRock employee volunteers planting 600 native trees in a space the size of a tennis court for each plot. The locations were selected to provide green spaces to areas and communities facing significant socio-economic disadvantage and that would benefit most from easy access to green spaces, such as schools or community houses.

With the Tiny Forests planted and with community science days still to come, BlackRock employees, in partnership with Earthwatch, will look to understand how increased access to green spaces like a Tiny Forest may impact underserved communities, in addition to facilitating research in local biodiversity and climate impacts. Moving forward, BlackRock employees will continue to have the opportunity to contribute to Earthwatch Europe by helping monitor and maintain the four Tiny Forests as they grow.