Of Mermaids, Poo and Plastic Pollution

Our Fresh Water Research Lead, Isabel Bishop (also known as @FreshwaterIzzy on Twitter) reflects on a special day out involving a mermaid and a plastic litter-filled poo sculpture.

I met a mermaid last week. She had a cheeky grin, an infectious sense of humour, and a beautiful golden fin. She was swimming along the River Avon near Bristol looking for an otter. But her progress was being hampered… by poo.

The mermaid in question was Urban Mermaid Lindsey Cole. A few years ago she swam the length of the River Thames to raise awareness of plastic pollution. She was accompanied by a support canoe, which towed a sculpture made from 600 plastic bottles. She filled the sculpture with litter she collected along the way. As she was passing through Oxfordshire she spotted what she thought was yet another white plastic bag. It wasn’t. It was a cow! And it was drowning! She hit tabloid headlines (Mermaid saves cow from drowning in Thames!). She later turned the whole saga into a children’s book, The Mermaid and the Cow. 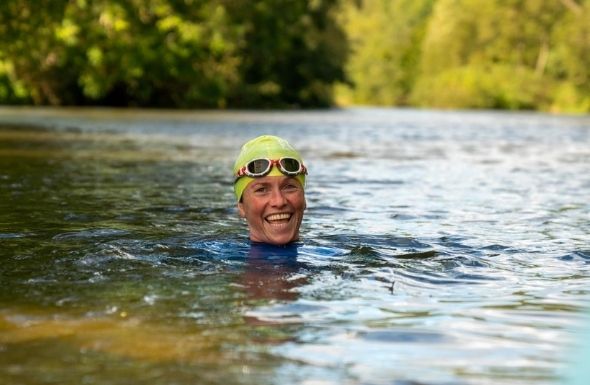 Her latest adventure sees her donning her mermaid tail again, this time to draw attention to river pollution. This month she ‘mermaided’ her local river, the Bristol Avon, investigating how river pollution affects wildlife including a local favourite: the European Otter. She intends to turn her adventure into a film and accompanying book, The Mermaid and the Otter. Oh, and she is doing the whole thing with a giant poo sculpture in tow. 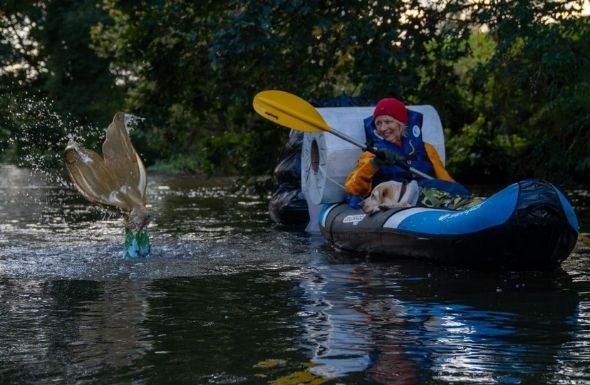 Only 14% of English rivers are in ‘good ecological state’. Two of the major causes of this widespread decline in river health are sewage discharges and run-off of nutrients from intensive agriculture. In short: poo. Strange as it seems, the giant poo sculpture couldn’t be more apt.

Lindsey’s concept for the film was to swim along the river hunting for an otter (a creature that loves clean water). She would meet various experts along the way, asking whether any of them had seen an otter and talking to them about the various things people can do to help clean up our rivers for wildlife. I was due to meet Lindsey just downstream of Bath, where we would chat about citizen science, demo some FreshWater Watch test kits, and encourage people to use citizen science as a means to investigate and draw attention to the health of their local river. At 9.30pm the night before we were due to meet, I had a phone call from a stressed sounding mermaid: ‘My canoe support is ill. I’m desperately trying to find someone who can help out.’ Naturally I stepped up. 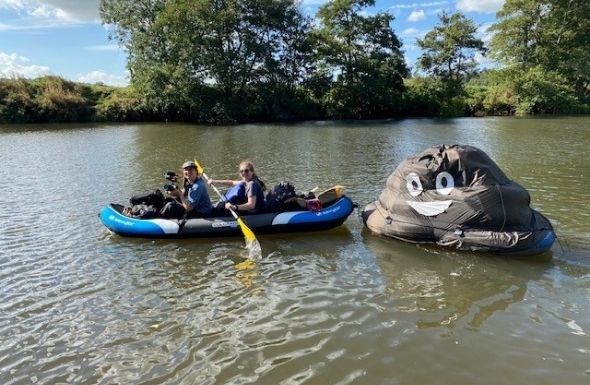 When I arrived, Lindsey took me to the riverside where she had parked the canoe. Her mouth dropped and she let out a little squeal. The canoe was there… but the poo wasn’t! She was visibly upset. The poo had become like her child over the past week. Thankfully we eventually spotted it behind a bush. It had drifted off down the river overnight and some rowers had mounted a poo rescue. That was my first interaction with the poo but definitely not my last. I spent the entire day towing the poo behind me, cursing it as it regularly blew me off course, and regularly crashing it into the riverbanks. I have to admit, though, I had become quite fond of it by the end of the day. 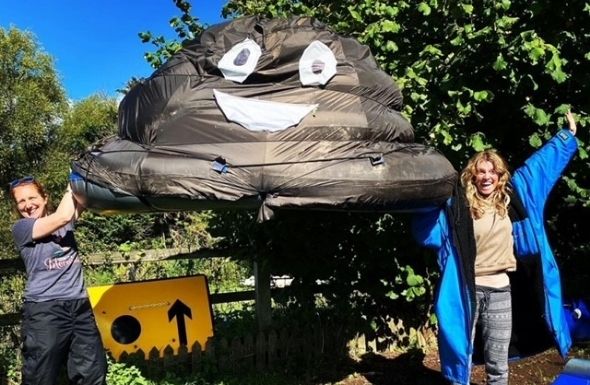 Lindsey, however, was struggling with poo of a different kind. She had been feeling a bit queasy all morning but as she started swimming it became clear that she was not okay. Looking around, we could see that the river was surrounded by fields of cows and recently harvested maize crops. I’d passed two muck spreaders on my way to the river too. It had been raining all day the previous day and it was incredibly likely that all of that poo was being washed into the river and making Lindsey sick.

Lindsey is an absolute trooper and kept swimming for a couple of miles. Then, though, we spotted a sign erected by the Rivers Trust on the riverbank: ‘Danger Raw Sewage – Swimming Not Advised.’ It was accompanied by a map showing at least 40 sewage discharge points upstream of our location. That’s a lot of poo! 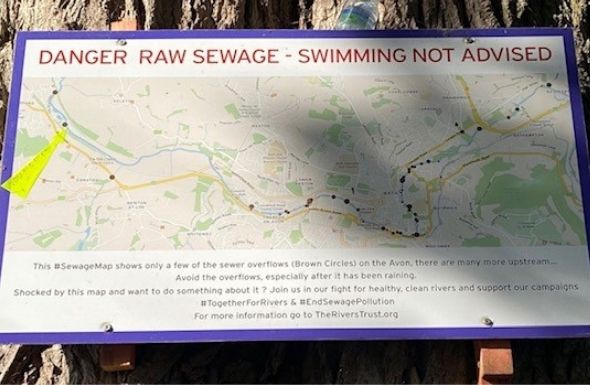 Determined to carry on with the filmmaking, we decided it would be a good time to capture a FreshWater Watch demo. FreshWater Watch does not measure the bacteria that were making Lindsey ill, but the kits could tell us the levels of nutrients present in the water. Nutrients (nitrates and phosphates) are present in poo, soil, and fertiliser, and when they get into a river in high doses they can cause algal blooms. These algal blooms reduce light and oxygen levels under the water, eventually killing off plants, insects, and fish. Which means no food for our friendly otters.

Our results came back showing poor water quality with both phosphates and nitrates elevated. This is just one single measurement so we might have caught the river on a bad day. However, by comparing to other data, we can start to build a picture of what is going on. The Environment Agency don’t monitor regularly at this location, but their assessment for the stretch of river between Bath and Bristol is that it is of ‘moderate ecological status’ and suffers from elevated phosphates as a result of sewage discharges. Our FreshWater Watch community group working with Bristol Avon Rivers Trust do collect data here and their results show that phosphates are usually fairly low but occasionally spike. The location in question is right next to a sewage treatment works so these spikes could be related to sewage spills. If spikes like this happen on a regular basis, it might spell bad news for the otters that have been spotted along this stretch of river. 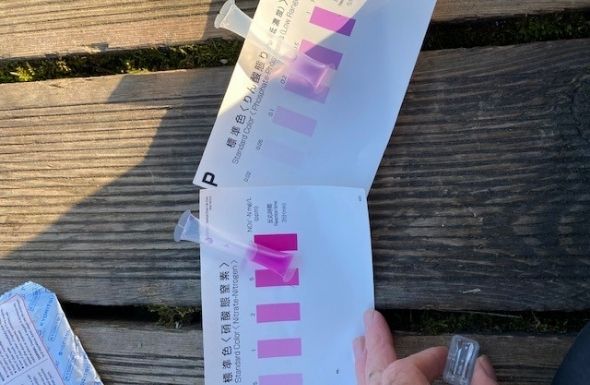 Nitrates and phosphates were high, there was a sign warning of sewage pollution, and Lindsey was being sick on a regular basis. I had planned to finish the day by putting on my own mermaid tail and joining her for a swim. Instead we decided it was best if everyone got out of the water. We hitched a lift with a friendly houseboat owner to the planned endpoint for the day. It was a disappointing but fitting end to this particular stretch of the adventure.

Lindsey’s journey down the river continued for the next two days. She remained quite ill, but she nevertheless mermaided into Bristol harbour on Sunday evening where she was greeted by a crowd of synchronised swimmers. In her words, she is absolutely pooped.

You can find out more about Lindsey’s work, including the upcoming book Mermaid and the Otter here.

If you want to collect evidence to support our fight for clean rivers, why not set up a FreshWater Watch community group?