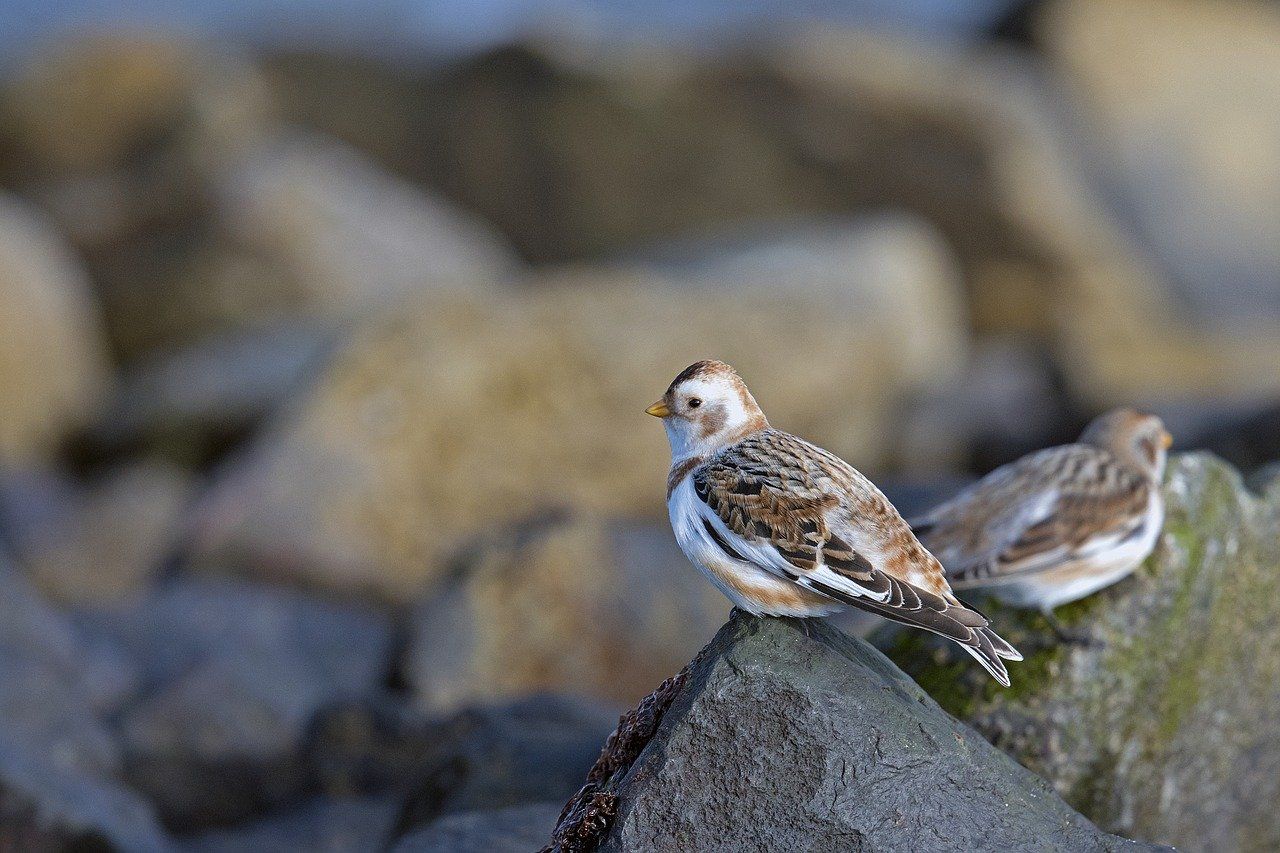 Many animals migrate, including wildebeest, butterflies and (most commonly of all) birds. Their ability to fly makes them the most capable of long-distance migration, often flying for miles and miles to find food in the winter and avoid harsh weather. An astonishing 4,000 species regularly migrate from one part of the world to another. 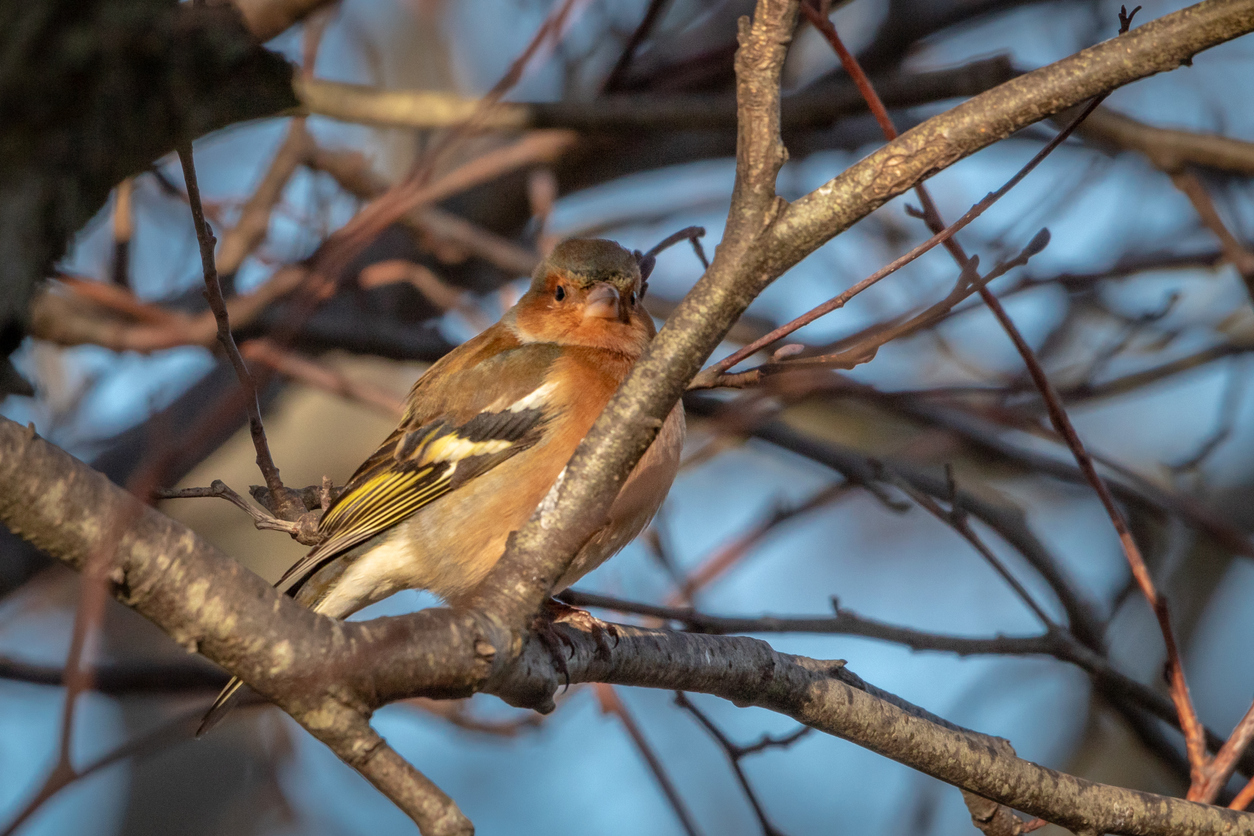 Both of these winter migrants are quite small. The Brambling has striking yellow wings, and the Fieldfare has an orange or yellow speckled chest and black tail. They can be found in hedgerows and woodland when visiting the UK. They have similar diets, and sometimes diverge from their fruit and nut diets to invertebrates when the ground is soft enough.

Beechmasts are the nuts that beech trees drop in autumn, and are a main motivation for brambling migration. Numbers can vary widely depending on beechmast availability. Coming from Scandinavia and Russia, these yellow-winged birds fly to the UK during their migration to escape freezing cold temperatures – yes, they come to the UK to escape the cold! The Fieldfare also comes from Scandinavia, but for fruit rather than the nuts. Both birds winter in the UK before flying home in April when spring is in full swing. In 2017, only two breeding pairs of fieldfares were recorded in the UK, which has flagged up concern with conservation charities such as the Woodland Trust. 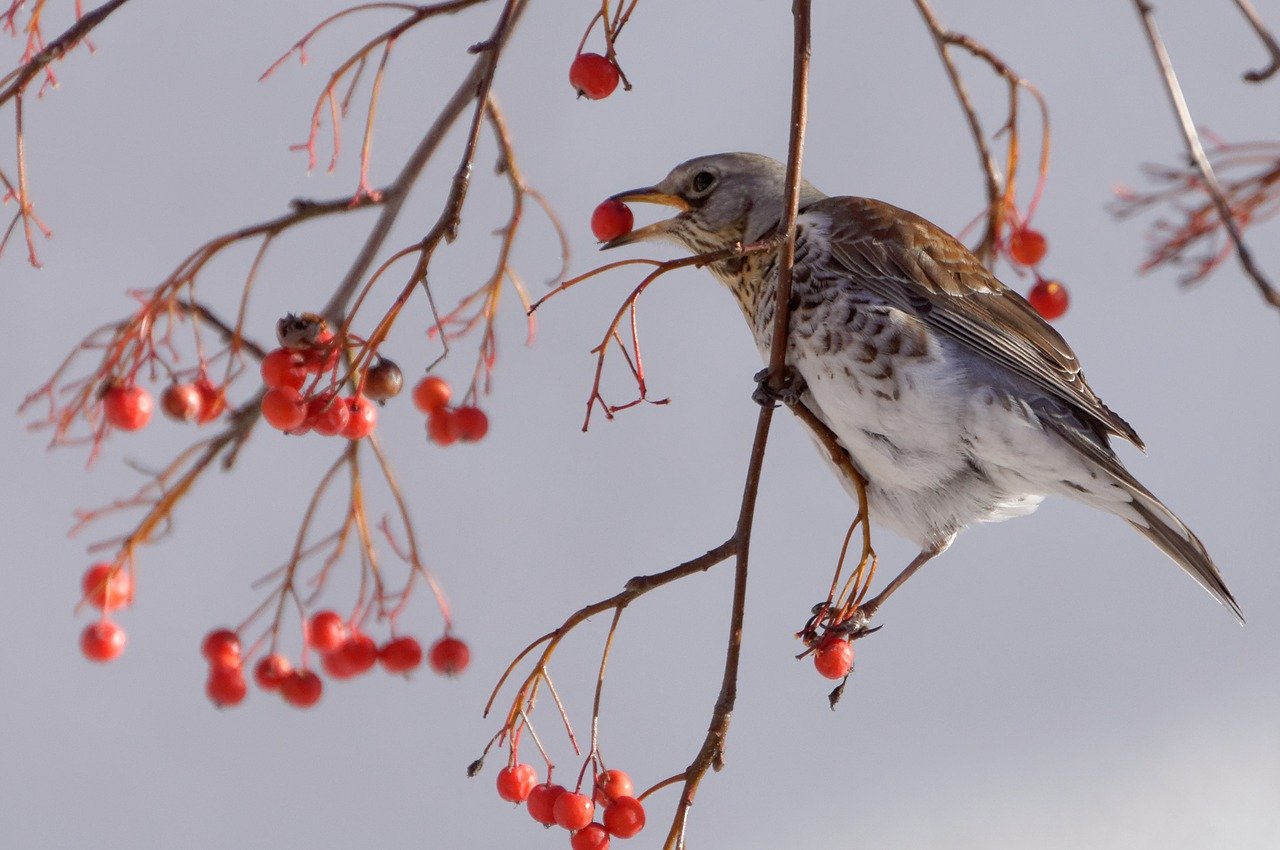 The brambling, fieldfare and blackcap all come to the UK in hope of a warmer climate. The blackcap is slightly different, because it arrives a lot earlier in the year. Arriving in spring, the blackcap summers in the UK and flies back to north Africa or southern Europe in September, almost completely avoiding the colder weather. Over the last 60 years the number of wintering blackcaps has grown in the UK. One reason for this is thought to be the number of people leaving bird food out in their garden. Another reason could be the impact of climate change resulting in milder winters. But what does this mean for the future of the blackcap?

It means that blackcaps are more likely to winter in the UK and create breeding areas rather than migrating south as they normally do. Another possibility, according to the British Trust for Ornithology, is that blackcaps will just stay in Europe, where weather is more favourable and supplementary food still plentiful. 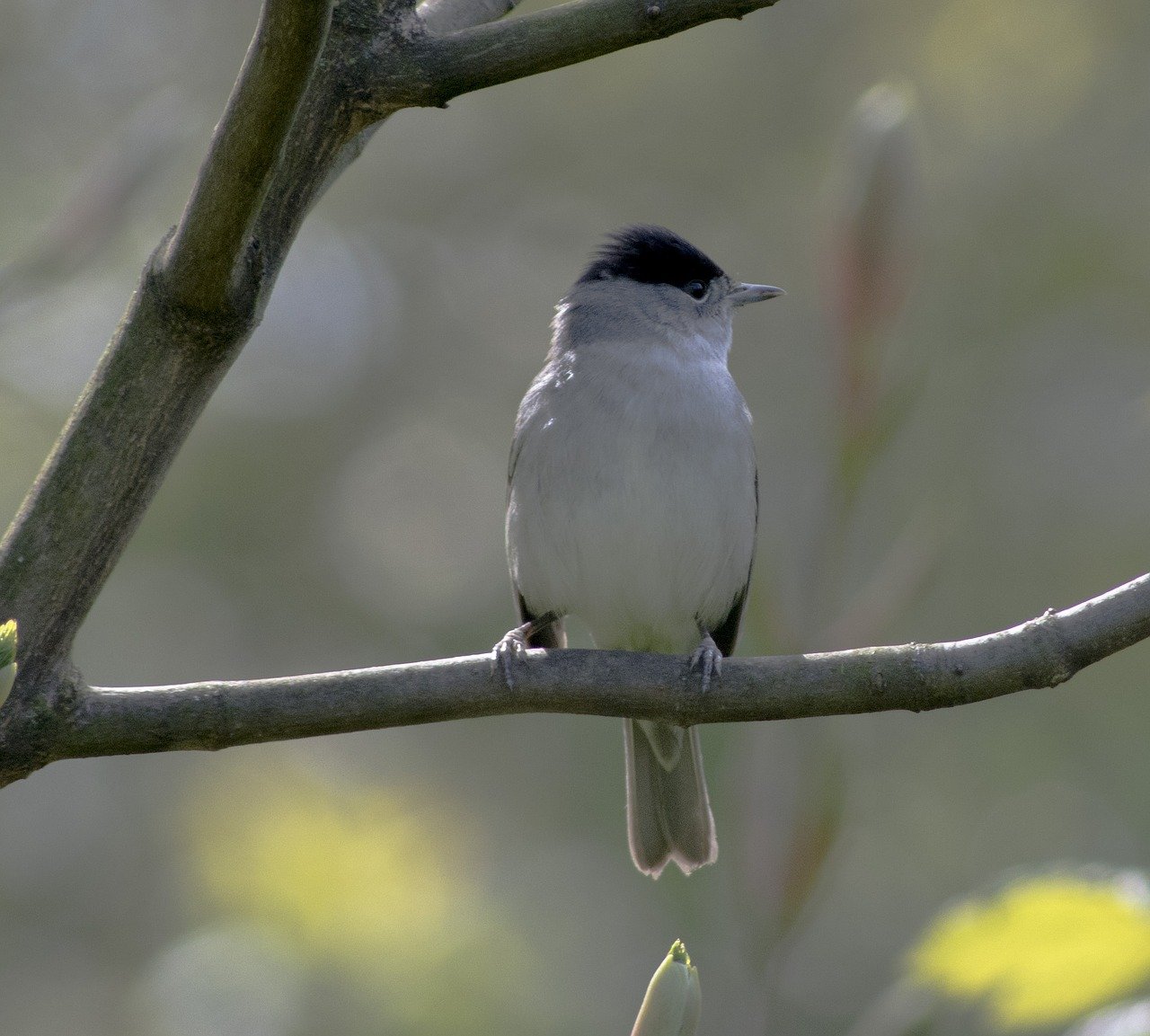 Migrating from Scandinavia, Canada, Alaska and Greenland, the snow bunting can fly up to 5,500 km to the UK in winter time when food is scarce in their home countries. More commonly found in the north of the UK, these snowy birds are currently on the ‘at risk’ list in Scotland due to low numbers of breeding pairs. Their white plumage disguises them against the white of the snow, protecting them from predators, and in warmer months in spring they develop a lighter brown plumage. They leave the UK in February or March, flying back north a little heavier than when they came. 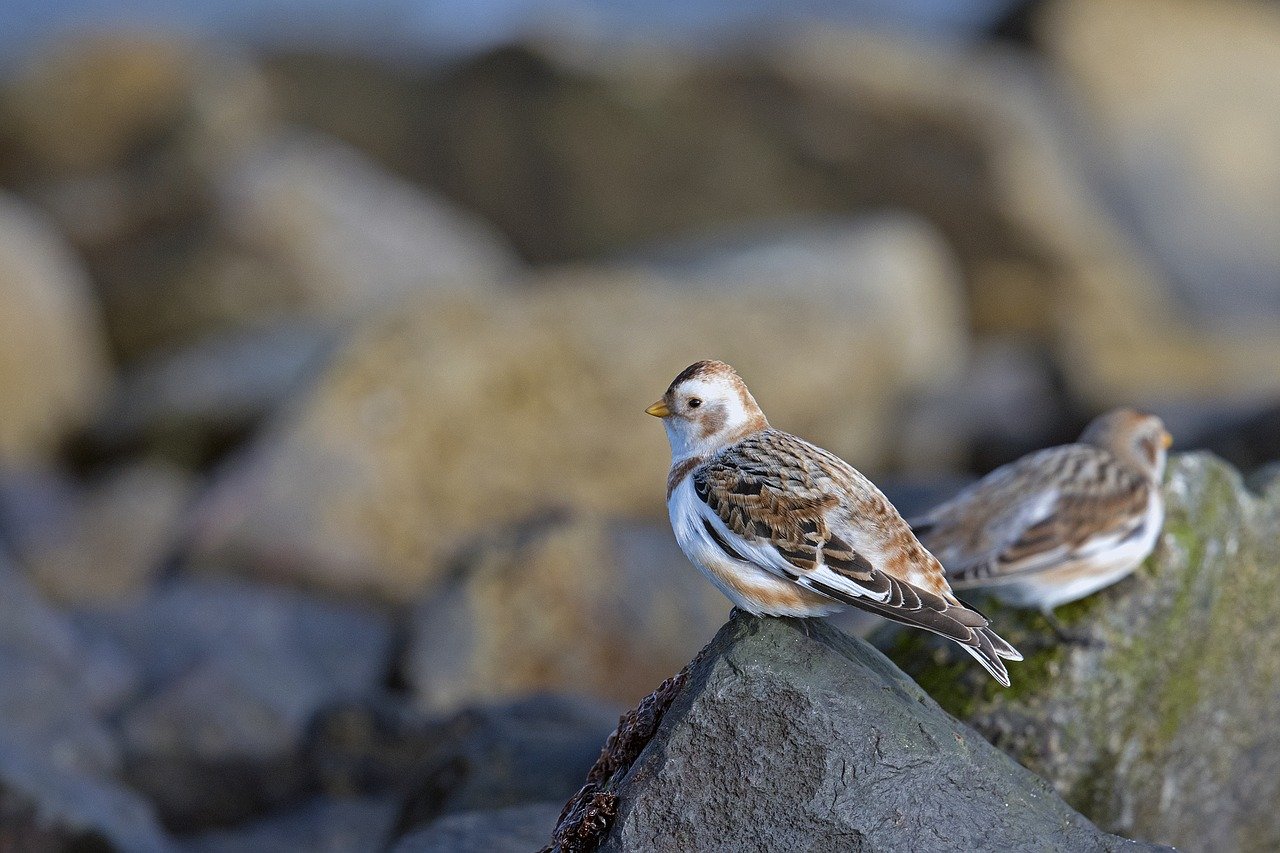 Various studies have shown that climate change impacts the snow bunting population. Warmer springs have been known to bring on earlier breeding times for birds, including snow buntings. This can be an issue, as lack of food in these earlier months leads to an increase in juvenile mortality. On the other side of the coin, high temperatures have been shown to help snow bunting survival, increasing the survival of young (Fossøy et al, 2015). Who knows what the future may hold for this little bird?

Overall it is clear that humans are not the only ones that like to escape the cold, and even though we may not be able to travel much at the moment, our feathered friends are travelling for us.