A quarter of British mammals are threatened by extinction. What can I do?

The first Red List for UK mammals was released yesterday by the British Mammal Society. It highlights 11 native species from a range of habitats that are at risk of extinction.

We have known for a long time that British wildlife is under threat. The 2019 State of Nature report maps out how since the 1970s we have contributed to reductions in the abundance (number of individuals) and distribution (area occupied) of species.

To preserve threatened species and reverse the trend of wildlife decline we need to take action, both nationally and as individuals. Naturehood’s role in combatting this challenge is both supporting you to take action for wildlife in your own space and bringing you together with likeminded people in your community and from across the UK. Together we can achieve even greater changes and contribute to the science we need to understand the threats our species face.

The Red List for Great Britain was produced by the Mammal Society and has received authorisation on behalf of the International Union for the Conservation of Nature (IUCN) at a regional level. This means that the classification of species was carried out using a robust, internationally-agreed system.
Eleven species are identified as being threatened by extinction to some degree (critically endangered, endangered and vulnerable), including a number of bat species, red squirrels and hedgehogs. The report sounds the alarm bell for preserving these species in our landscape, highlighting human impacts on the integrity of our woodland, river and mountain ecosystems. 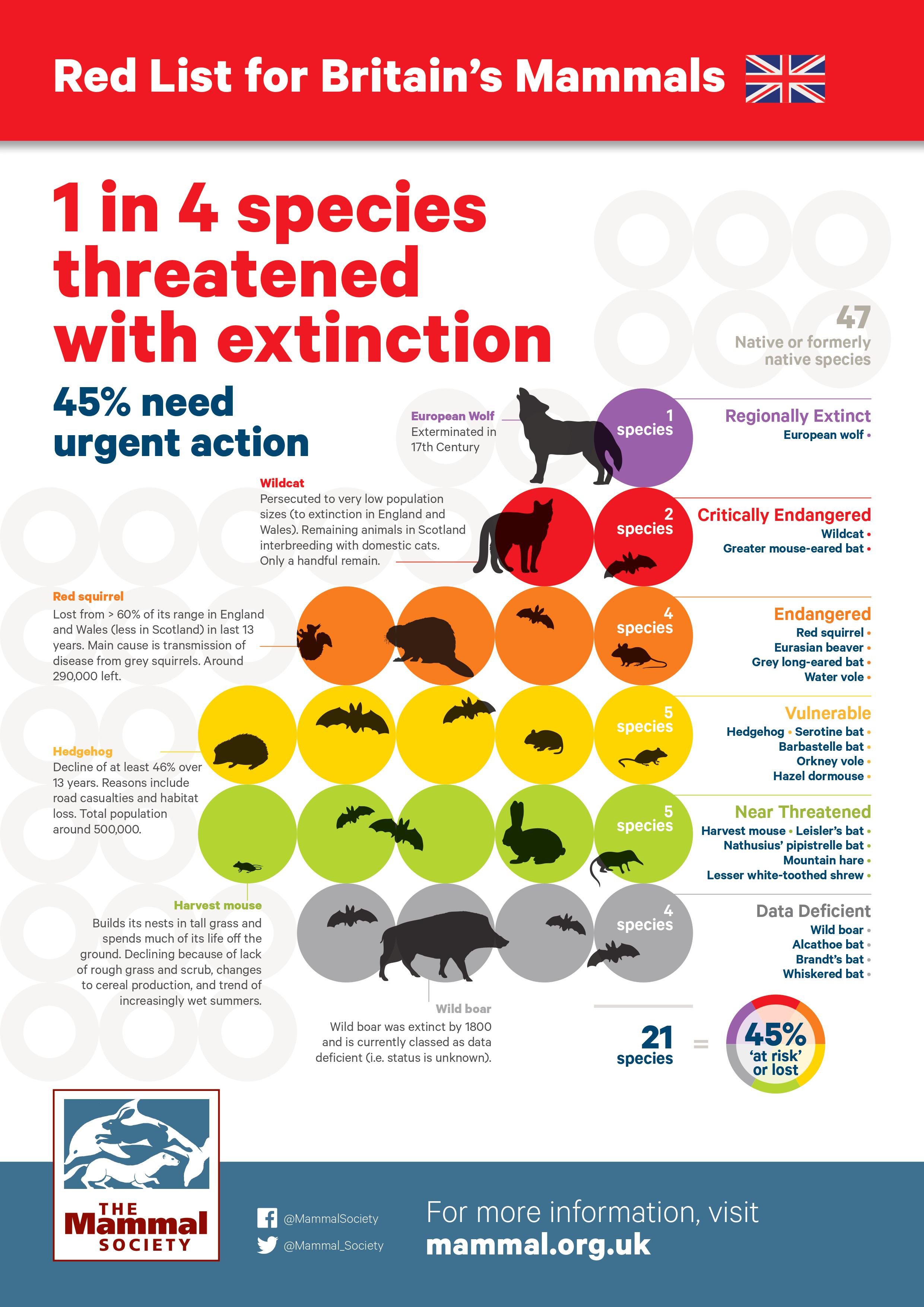 In addition to those species identified as being under threat, for some native mammals a lack of data means no classification could be given. This means that we don’t know for sure what threat level these species are facing. Without this information conservation efforts can’t be as targeted and may miss opportunities to save spaces that are vital for their long-term survival. Private spaces, our balconies, gardens and allotments are one area where we lack data. Naturehood collects this important, missing, information for many types of animal through our Naturespace Challenge, which runs every spring, summer and autumn.

How do we reverse this trend?

Last year the latest State of Nature report gave useful insight into the many ways in which we are impacting nature. To address some of these threats, as the Mammal Society highlight, we need ambitious national and regional action, to protect and restore large areas of suitable habitat. To boost the resilience of the species in these larger areas, we need healthy spaces connecting them, which is where your own small space can play an important role.

It is important to remember that many species live in towns and cities. One of the things we hear about most on Naturehood are visiting insects, birds and mammals, especially hedgehogs. Research from the People’s Trust for Endangered Species even found that between 2012 and 2018 hedgehogs living in urban and suburban areas lost fewer sites and where populations remain numbers appeared to be growing.

Hedgehogs are big fans of urban gardens, even a patio with a couple of planters and a compost bin will have plenty of slugs, snails and other invertebrates that make up a hedgehog’s diet. Hedgehogs can run quite fast, and swim surprisingly well, but sadly do not have the ability to climb fences, so we need to help them access these garden resources. By connecting our spaces with gaps in the borders and adding some features for wildlife is how we create these corridors of suitable habitat for wildlife in our towns and cities.

What can I do?

To help support wildlife you can take action with Naturehood, creating features to support a wide variety of species, and record what you find to help improve our picture of what is happening to UK biodiversity. Naturehood is the perfect place to do this, and connect with likeminded people locally and nationally.

The Naturehood community is an amazing place to share stories, ideas and questions. We love to see what you are doing to connect with nature and are keen to share deas and inspiration through our regular livestreams, as well as thought provoking blogs and threads, and you can ask our experts anything about your local wildlife.

In your space there are a number of simple, low cost actions you can take, as well as some larger projects. We support the creation and maintenance of these features in your space with science-based guidance under the ‘Take action’ tab on the Naturehood platform.

When you join in with Naturehood you can also help our research, by telling us about your space and taking part in the seasonal Naturespace Challenge, which gives us valuable insight into which species are using your space, and how your actions have boosted resources for wildlife.

Join Naturehood and become a wildlife champion in your community, using our resources for community action. Taking action for wildlife collectively as a local community creates the connected corridors of habitat that our species need. Together you can also monitor the impact of these changes with our simple surveys. Unlock this potential for your community to start reversing the trend for British wildlife by sharing this blog and encouraging your friends and neighbours to join us on Naturehood!