Inside the soil lab: what happens to the soil collected by Citizen Scientists?

At the end of 2019, Earthwatch, WaterAid and WWF celebrated eight years of the HSBC Water Programme. The partnership aimed to provide and protect water sources and the ecosystems they support, inform and educate communities in need, and enable people to prosper across the world.

In the latter phase of this programme, Earthwatch engaged over 1,800 employees, globally, through the Sustainability Training Programme (STP) – training them to become citizen scientists, collecting data to support our research into Climate-Proof Cities. In the UK and France, research was conducted to better understand the relationship between urban tree management and the ecosystem services trees provide. To do this, the citizen scientists collected and tested soil samples in the field, and sent further samples to labs for more robust testing.

Angie Elwin explains how Vicky Struthers and Nerea Ferrando Jorge, researchers from the University of Reading, use the soil samples collected by HSBC citizen scientists and exactly what happens to the soil in the lab. 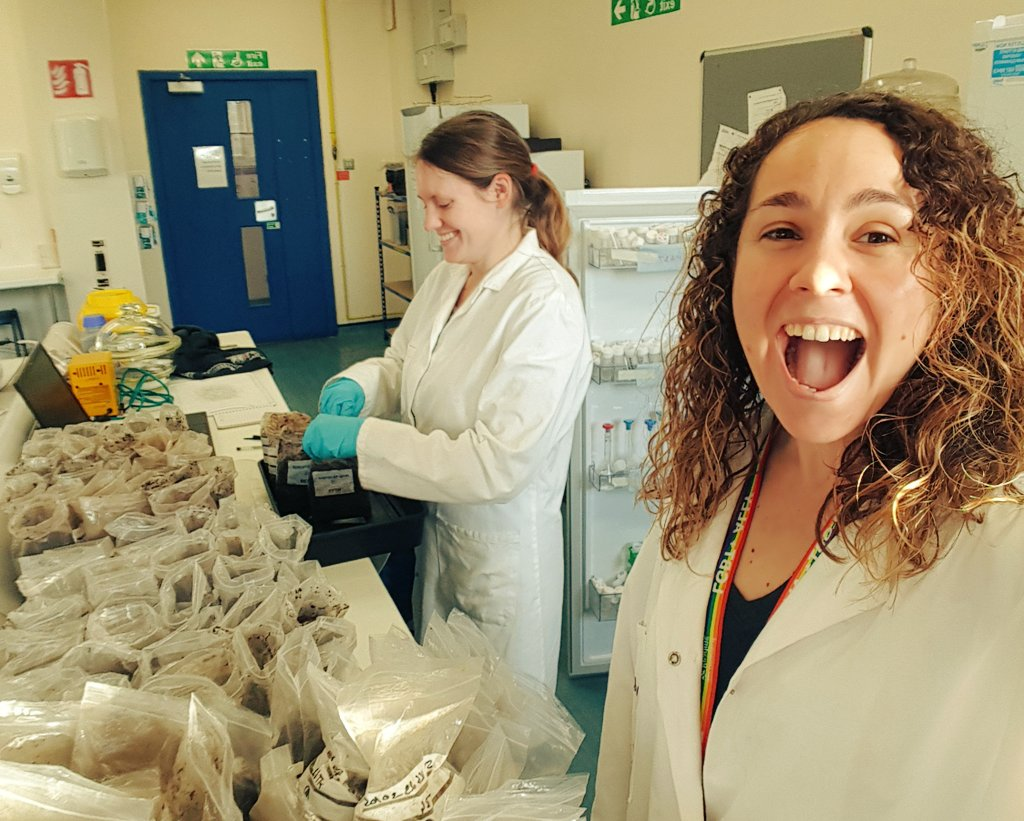 Image: Researchers Vicky Struthers (left) and Nerea Ferrando Jorge (right) at the University of Reading who are analysing the soil samples collected on the HSBC Sustainability Training Programme.

Inside the soil lab: what happened to the soil collected by HSBC Citizen Scientists?

Between 2018 and 2019, employees from HSBC collected around 1,200 soil samples, around 800 bags of soil, during 16 events in Paris (Les Fontaines), London (Kew Gardens) and Birmingham (Cannon Hill Park). HSBC Citizen Scientists were trained through the STP, carried out as part of Earthwatch’s Climate Proof Cities programme in partnership with Imperial College London, University of Reading, the French National Institute for Agricultural Research (INRA) and the French Centre for Scientific Research (CNRS). The soil data gathered is being used to evaluate the impact of litter management (with and without litter removal) below and outside the canopy of Lime trees (Tilia europaea) on soil properties that affect carbon storage and infiltration to reduce flood risk.

So, what happened to these bags of soil after the field event?

Well, half were sent to soil scientists at the University of Reading to be analysed for their chemical and physical properties. In this blog, you'll find out about the journey each soil sample went on in the laboratory, and how this shaped our knowledge and allowed us to share it with the wider research community.

You filled those bags with soil… what happened next? 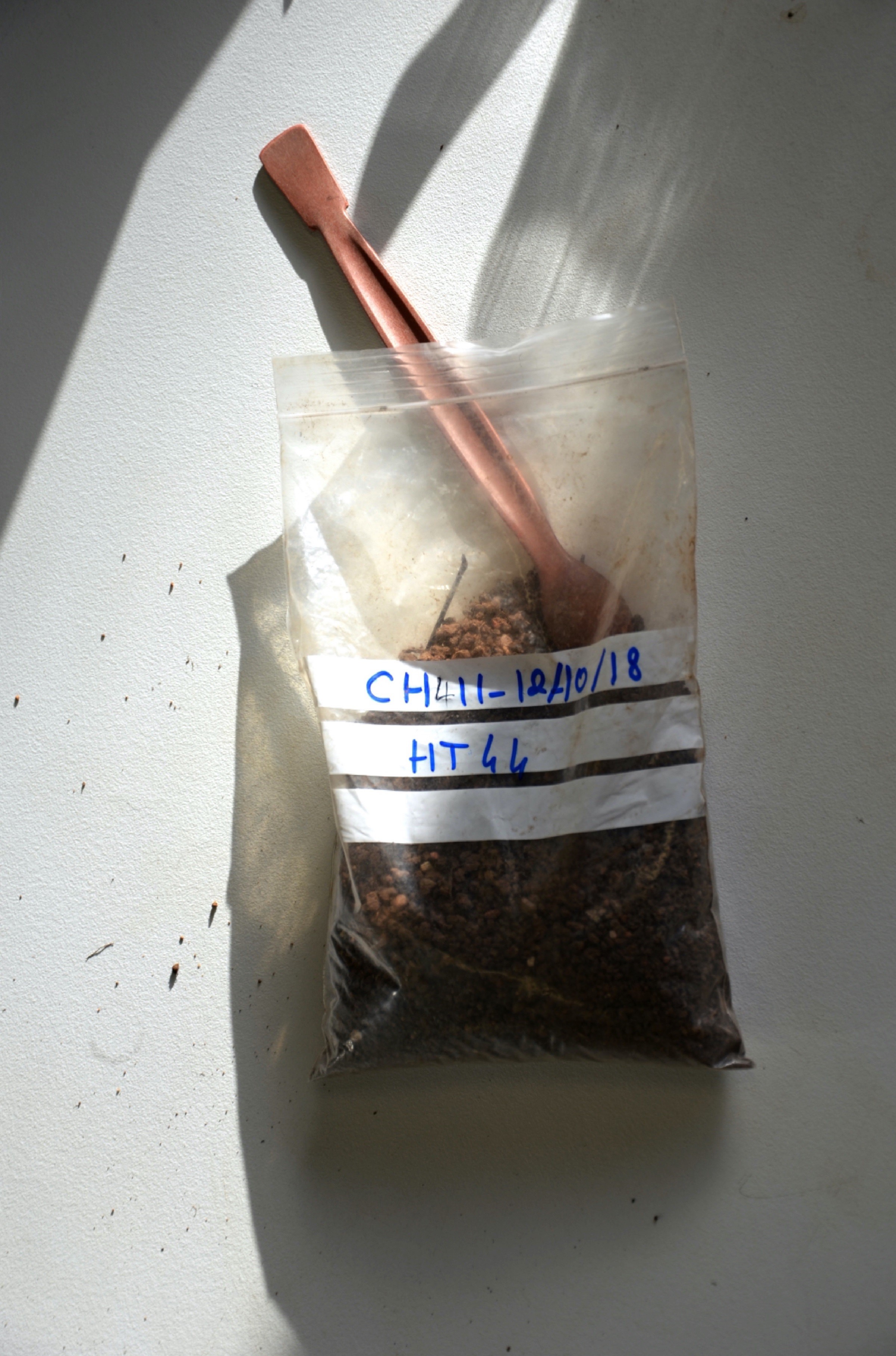 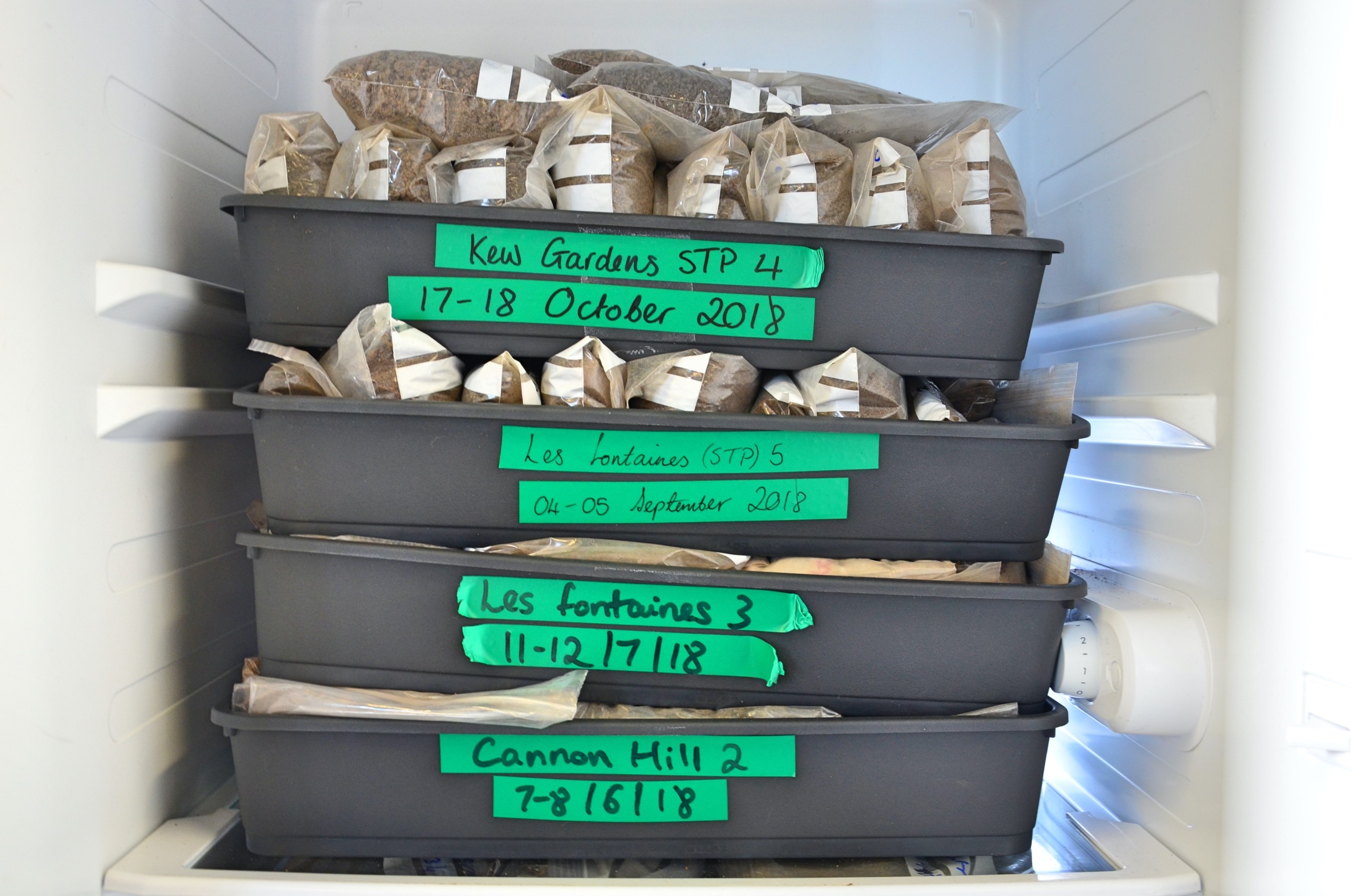 Over the course of the STP, around 400 bags of soil, each with their unique ID, were sent to two PhD researchers, us, Nerea Ferrando Jorge and Vicky Struthers, at the Department of Geography and Environment Science, University of Reading.

When a new batch of soil samples arrives we get to work preparing the soils for analysis. This involves weighing each sample and sieving the soil to remove any debris: such as stones, roots and twigs. Once the soils are prepared, a series of tests are carried out to determine the physical and chemical characteristics of the different soil samples. Measurements include aggregate stability, soil pH, total organic carbon (TOC) and soil organic matter (SOM) content, water extractable carbon (C) and nitrogen (N), total nitrogen content, the ratio of carbon to nitrogen in the soils (C:N), spectral reflectance, soil colour and soil texture. These measurements help us to understand if litter removal is affecting soil carbon storage and also if soil structure is affected by soil organic matter. Good structure helps water infiltrate into the soil.

How are these soil measurements done?

The organic matter content in the soil samples can be measured using the soil ‘Loss on Ignition’ (LOI) method. This is based on weight change associated with high-temperature oxidation (removal) of organic matter. For this analysis, around 10g of each sieved soil sample is placed in labelled porcelain crucibles and oven-dried for 24 hours at 105ºC, it is then cooled in a desiccator and reweighed. The oven-dried samples are then ignited in a muffle furnace for 12 hours at 500ºC and reweighed. The percentage of organic matter in the soil sample can then be estimated based on the weight change of the sample. This is done by taking the dry weight before combustion minus the dry weight after combustion and then dividing the value by the dry weight before combustion. Organic carbon in the soils can be estimated based on the assumption that organic matter contains 58% carbon. However, we do measure the total carbon content of a sub-sample of these soils, to create a unique calibration for these field sites, ensuring the most accurate results possible! 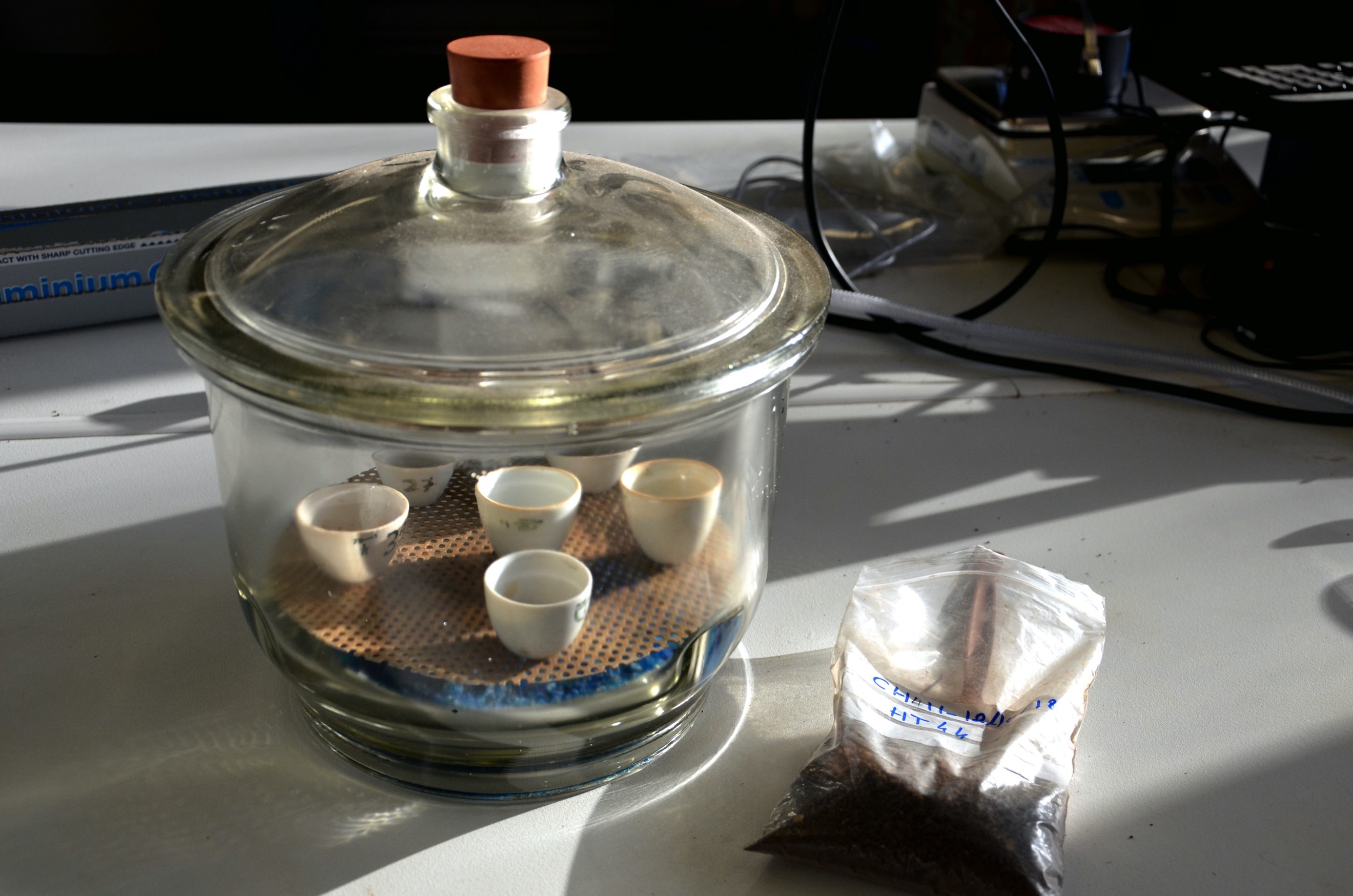 Image: Crucibles of soil in a desiccator.

Another measurement conducted in the lab that can give an indication of the soil's health is soil aggregate stability. This is done using the soil ‘slaking’ method, which is something you can try at home. Slaking refers to the breaking down of soil into smaller fragments on wetting and indicates how stable the soil structure could be during periods of rain. Low slaking scores can be influenced by the amount of organic matter in the soil. Organic matter reduces slaking by binding mineral particles and by slowing the rate of wetting.

Before the test can be carried out, soil samples need to be air-dried. We then drop three pea-sized fragments of soil, from each sample, into a disk of distilled water and leave it for 10 minutes. The level of slaking is then measured on a scale of 0-4, where 0 is when the fragments have remained intact (no slaking) and 4 is when the fragments have completely collapsed into single grains (completely slaked).

Image: Soil slaking in the lab to measure aggregate stability

We also test for the soil's pH. This provides us with clues about the properties of the soil which affect soil health and plant growth: such as mineral and nutrient availability. Soil pH is measured quite easily in the lab. A soil solution first needs to be prepared. This is done by adding 45ml of ultrapure water to 4.5g of soil and shaking the mixture for 24 hours on an over-head shaker. The solution is then filtered, and the pH is measured using a calibrated pH meter.

The filtered soil solution is also used to measure other key soil properties such as dissolved organic carbon (DOC) content, which is determined using a Shizmadu Total Organic Carbon (TOC) analyser, and also the spectral reflectance of the soil using an ultraviolet-visible (UV-vis) spectrophotometer. 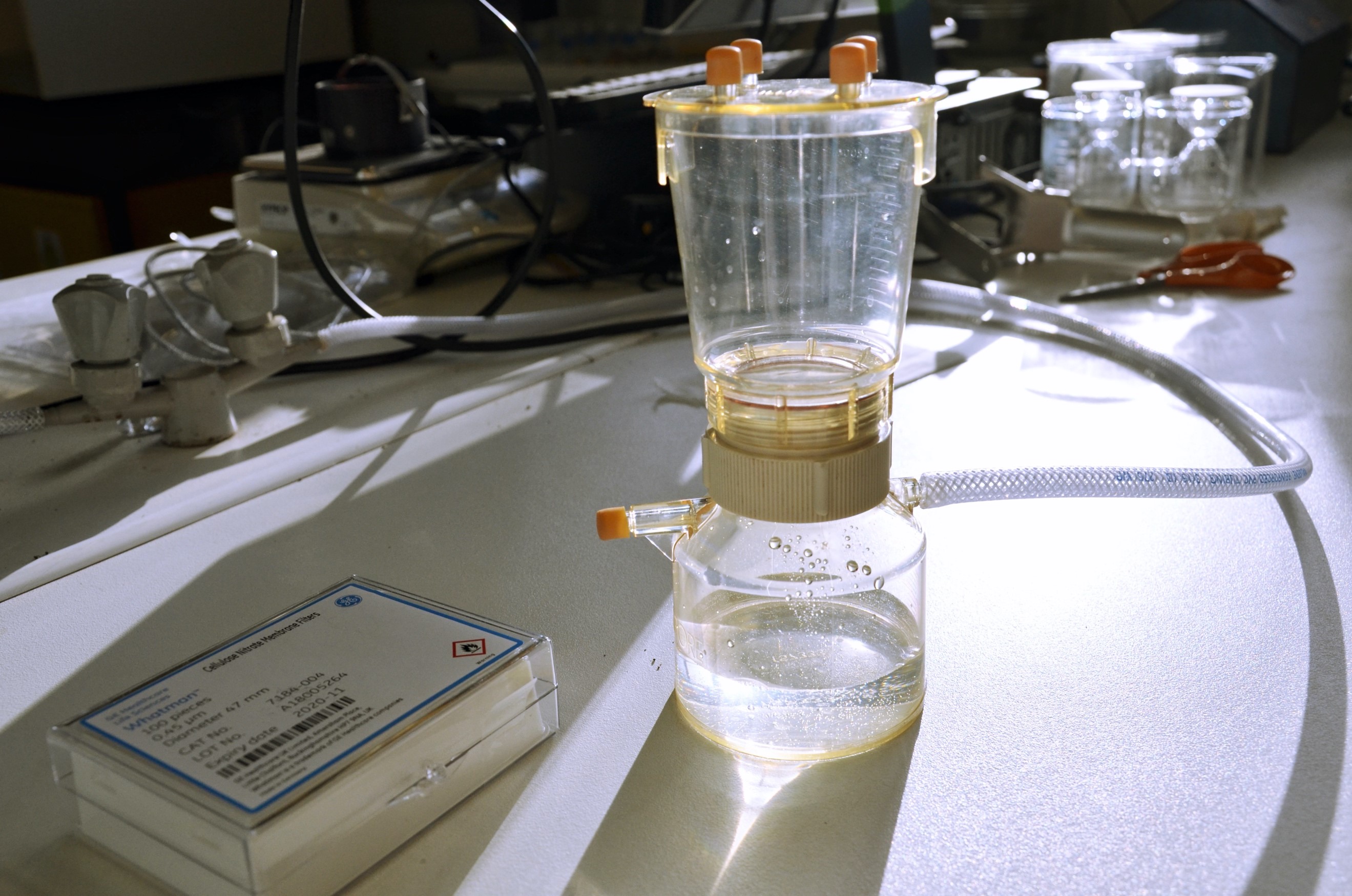 Finally, we also re-measure two things that were measured in the field: soil colour and soil texture.  This is to create evidence to demonstrate the reliability of the Citizen Science data collected. In the case of soil texture, we also use more sophisticated lab tools to see how the manual hand method compares.

Soil colour is determined by comparing the colour of each soil sample with a Munsell soil colour chart. The colour of the soil gives an indication of its mineral properties, with darker brown or black soils generally having a high amount of organic matter content. 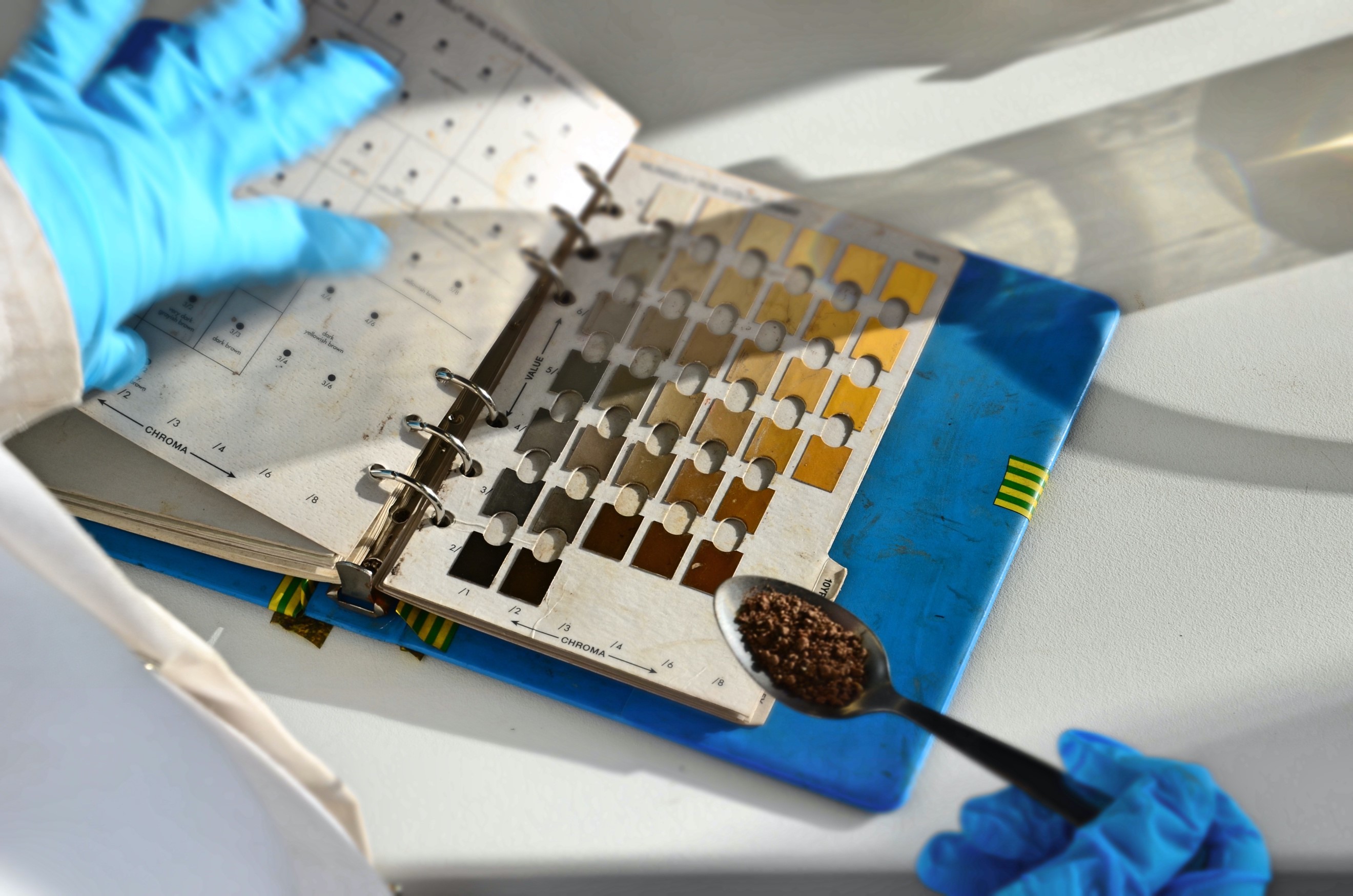 Image: Checking the colour of the soils in the lab

To measure the texture of the soil samples, granulometric analysis is conducted in the lab using a laser granulator. This method accurately determines the proportions of sand, silt and clay particles by their settling rates in an aqueous solution using a hydrometer. In the field, the Citizen Scientists used a proxy method for estimating soil texture by following a soil texture flow chart, which involved wetting the soil and measuring the size of the ‘soil sausage’ or ribbon formed, and assessing its relative grittiness or smoothness. Again, by comparing the soil texture measurements made by Citizen Scientists with those made by us in the lab, the accuracy and reliability of the methods can be evaluated. 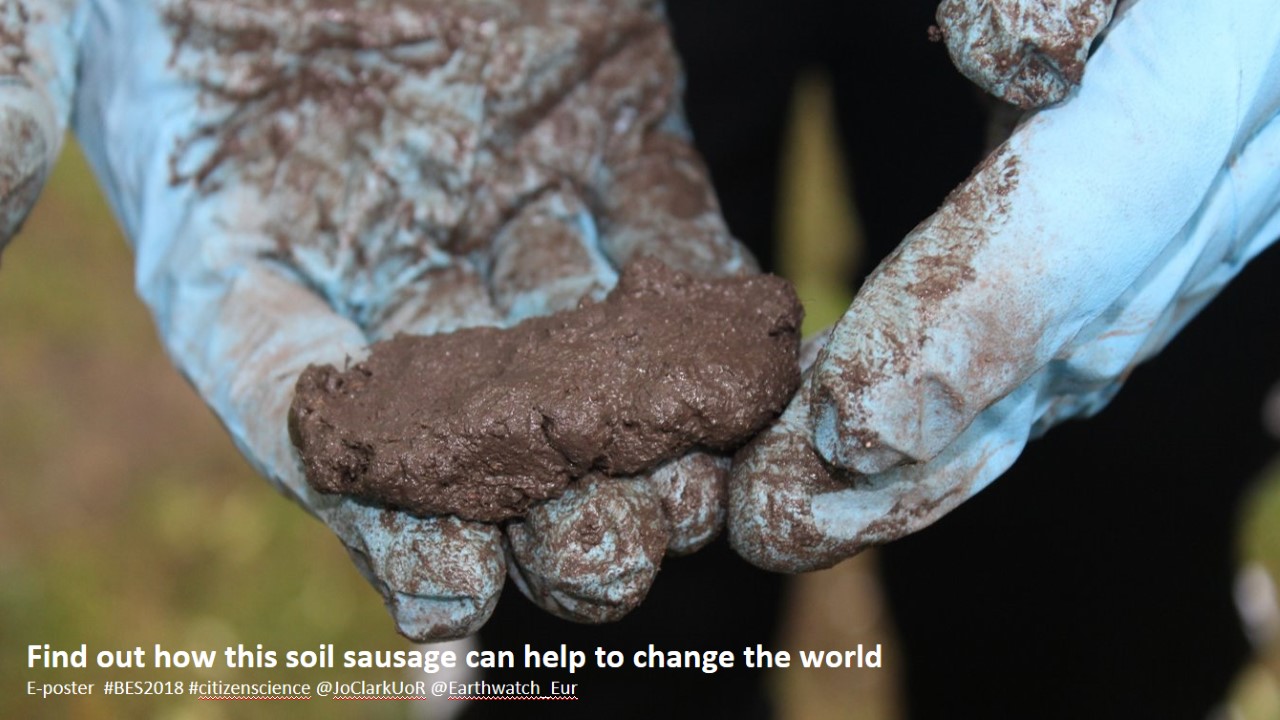 As you can probably imagine, the soil analysis is very time consuming and it can take a few months. The lab work at the University of Reading is currently still ongoing. However, some preliminary results have already been presented at national and international conferences, such as at the British Ecological Society Annual Meeting in 2018, which is Europe’s largest event for ecology, where they were displayed an interactive iPoster. They were also displayed at the Wageningen Soil Conference in 2019, where Nerea Ferrando Jorge was awarded best scientific poster for her work based on the findings titled ‘Interlinkages between soil and tree health in the urban environment: a Citizen Science EU research project’. 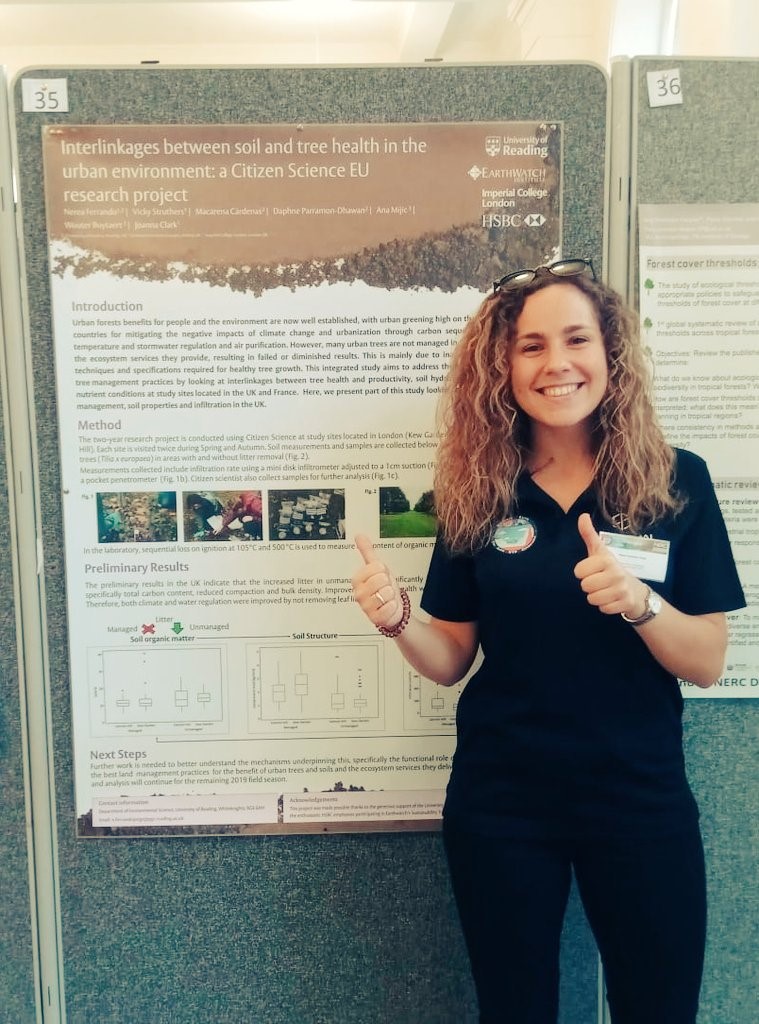 Once all the data is ready, we will evaluate and publish the results in papers to share with others. The aim will be to provide key insights and recommendations for policymakers and urban planners for improved management of trees in urban areas to help manage the effects of climate change and flood risk.