A New Deal For Nature

Programme Manager for Naturehood, Ben Williams, reflects on the recent release of the report ‘A New Deal for Nature’, and what it might mean for environmental policy in the coming years.

Commissioned by the Green Party and authored by produced by conservationists and nature writers, ‘A New Deal for Nature’ is a welcome addition to the nature conservation debate. It follows on from the State of Nature report released earlier this year, and begins to propose policy and regulatory instruments that might begin to turn the ship around for wildlife. 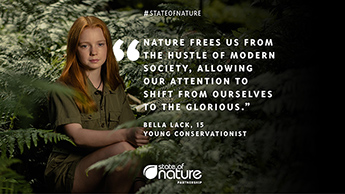 The narrative of the report launch places the Wildlife Crisis in parity with the Climate Crisis, in terms of its significance, urgency, and potential impact on human livelihoods. The report’s authors point to the vital aspects of food security and pollination, and the more cultural and social factors which wildlife underpins. In a recent audit, England was cited among the 30 most de-natured countries in the world. As a nation we spend more on perfume annually than we do on wildlife conservation. Whatever your political stripe, this is not a good place to be.

Bella Lack, young wildlife activist most recently seen as one of the spokespeople for the 2019 State of Nature report, responded to the report’s presentation with a poetic depiction of a conversation between the Earth and Humanity: “You and I can no longer be, unless you start seeing I as We”, which I think is far more where we need to be.

For my project Naturehood, there are two key sections: schools and young people, and urban wildlife. There is significant potential for impact in these areas, and some interesting ideas proposed by the report, but we have a lot further to go.

The Schools and Young people section centres around the much-publicised Natural History GCSE, and an aspiration of delivering one hour outdoor learning every day, in addition to break time. Personally I question the logic that putting a subject onto the curriculum leads to its students becoming enflamed with the desire to rush out to its rescue –to this day I still can’t look at a copy of To Kill a Mocking Bird without a chill going down my spine. . Knowledge and understanding is a key pillar of people’s behaviour, but it is far from the totality of it, and we must be cautious that in our attempts to re-wild the next generation, we don’t have the opposite effect and drive a wedge between them and nature.

Additionally the report places a lot of emphasis on young people being agents for change. As Bella again responded, “it’s great that you’re reaching out to my generation, but you can’t wait for us to be in power before you see real change, and you’re going to have to get adults involved in this as well”.

Urban wildlife centres on the provision of more and better quality wild spaces in our villages, towns and cities, which is great, but which doesn’t of itself overcome the disconnect between people and nature. If delivering Naturehood in the field for a year has taught me anything, it’s that if you build it, they will not necessarily come, and I think that’s an area that is badly lacking in this report. Yes you can address a lot of issues through regulation and legislation, but we need to bring people – a lot of people, and people from a lot of different cultures and backgrounds – with us in this process, and shift perceptions of the human/nature relationship.

This is where initiatives like Naturehood and the forthcoming Engaging Environments project can really lend weight to reports like this one. These initiatives exist in the interface between people and nature. Through the application of Earthwatch’s pioneering scientific approaches, they have the potential to deliver real understanding about what is effective in engaging diverse communities with environmental conversations, and what tools can be deployed if we want to start fostering behaviour change at the community scale.

Despite those limitations however, it’s a great report, with a huge amount of potential within it. Whatever the outcome of this general election, I hope that this report gets the profile that it deserves, and that it can drive cross-party action on this key national issue.