GUEST BLOG: The time to act on the climate emergency is now

As the UN Secretary General's Climate Action Summit gets underway in New York, Lucian J. Hudson, Chair, Earthwatch Europe, and Peter Hudson, writer on the environment and climate campaigner, consider the scale of the challenge we face, and the need for urgent - and unprecedented - collaborative action across government, business and civil society. 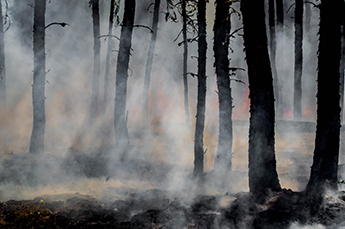 We must all wake up to the climate emergency and loss of biodiversity facing us. And we must put unprecedented pressure on the main forces who deliver political, economic and social change. The scale and challenge requires all of us to be committed and to exercise will and wherewithal. It is not good enough to let others, including Extinction Rebellion, mobilise our fears and anger for us, when we ourselves can and should make more of a difference. All political parties must give this much greater priority; we also need business leaders to demonstrate this; and civil society organisations, including professional bodies, need to be more forthright in setting the expectation that society needs to work more cohesively to deliver a more sustainable future.

Our place on Earth, a ‘pale blue dot’ floating in the vastness of space, is in peril. All that we have dreamed, created and loved may be no more within the relative blink of an eye. There are very few remains of dinosaurs, which lasted for 180 million years, 36,000 times longer than recorded human history thus far. What will remain of us, a race which may be the most advanced species ever to have existed?

This is the existential backdrop to the climate emergency it is our misfortune and challenge to face. The brutal truth is that rising carbon emissions mean our world is currently on course for a rise of 3 degrees Celsius. A rise of 4 degrees by the end of the 21st Century may be possible. Few of the world’s economies are living up to their Paris Agreement commitments, which aimed to limit average global temperature rise to 1.5 degrees and to below 2 degrees above pre-industrial levels. There is also growing evidence that parts of our world are already experiencing the effects of a rise of 2 degrees. We have never previously experienced such high average global temperatures in our existence and life for most of us is set to be ‘poor, nasty, brutish, and short’.

Let us be emotionally honest: it is scary and for many of us, our instinct will be to turn away. There is evidence that we go through several stages before accepting this is a reality and that we can take actions to stop matters worsening. It is also troubling that the leaders of our nations are not unanimously prioritising the climate emergency. Troubling but unsurprising: when has humanity ever been united as one?

In our own country, Brexit continues to dominate the Parliamentary and news agenda.  It is undoubtedly a hugely important issue. But its significance is incomparable to the threat presented by the climate emergency and loss of biodiversity.

We believe that 2020 offers an unrivalled opportunity for our nation to unite and to find a role in the world as the leader against climate change. The year will see a number of significant summits, with the 26th Conference of the Parties (COP26), being chief among them. COP26 will reconvene the decision-making body of the UN framework convention on climate change, and marks the deadline for countries to comply with Paris Agreement commitments on greenhouse gas emissions. It will also see the creation of commitments to take us up to 2030.

The UK will be the main host of COP26 and must rise to the occasion. Three quarters of the British public – covering people on both sides of the Brexit debate – regard climate change as the greatest crisis facing humanity and will support efforts led by our government. There are only a few times in the history of humanity when the stakes have been remotely as high. The Second World War conferences of Cairo, Tehran and Yalta, and summits during the Cold War to discuss nuclear non-proliferation, are obvious examples.

To be taken seriously in this new role, we must be visionary, ambitious and must lead by example. Nearly 80 years ago we led by example against another great existential threat. In his first speech as Prime Minister, Winston Churchill famously said ‘I have nothing to offer but blood, toil, tears and sweat.’ We should not shy away from the fact that we should transform our country against the climate emergency as if we are on a war footing. We should not shy away from the fact that it will take decades of hard work if we are to give our children and grandchildren a fighting chance of having a future worth living.

In this time of great political upheaval, there are some promising signs of consensus and ambition. In May, the British Parliament became the first national parliament in the world to declare a climate and ecological emergency. All the main political parties have now also released policies on tackling the climate emergency. In June, our government legislated for the UK to bring all its greenhouse gas emissions to net zero by 2050. The UK Government’s 25 Year Environment Plan has also laid out some good ideas on improving the UK’s environment. These include the introduction of an Office for Environmental Protection and a new environmental land management scheme to pay farmers and other land managers to restore and enhance habitats critical for wildlife and other natural-capital benefits.

Across the globe, there are other positive signs. Activists in the USA’s Sunrise Movement have spurred on a number of candidates running to be the 2020 Democratic Presidential nominee to place a Green New Deal for the USA at the forefront of their campaigns. India has announced that is set to achieve most of its climate change goals set for 2030 in the next one and a half years. China also appears to be on track to reach its climate change goals by 2021.

But this is not enough. In the past few months, among other developments, we have seen wild fires in the Arctic covering an area greater in size than the EU and the people of Iceland mourning the loss of their Okjokull glacier.  Of most concern, there have been widespread fires in the Amazon, home to 10% of the world’s biodiversity and one of the world’s largest carbon sinks. A recent report also informs us we are losing an area of forest the size of the UK each year.

On a certain level, what is required is simple: a single-minded and relentless focus on lowering carbon emissions, on protecting and expanding carbon sinks, and on protecting and enhancing our ecology. Millions of trees need to be planted in the UK, with billions of trees being planted across the planet. There needs to be a widespread shift to renewable energy, to electric transportation systems, and to truly energy-efficient homes. Carbon capture technology needs to be invested in and rapidly scaled up. Our fresh water, soil and air needs to improve.  Perhaps above all, there needs to be a ramping up of public education programmes and of education for the young, for those who will have to take tough decisions in the future. And all of this needs to be done as if the deadline was yesterday.

We know how ineffective and helpless one can feel when considering the climate emergency and loss of biodiversity. But there are specific ways we can not only engage with our concerns and expectations but also make something positive out of them. One approach that all parties can surely endorse is Greta Thunberg’s call to ‘unite behind the science’. In this post-truth world, science-based organisations such as Earthwatch Europe can play a critical role, not only in informing conservation but also in inspiring the action that is necessary to address these urgent challenges. In this time of crisis, such organisations are deploying all their means to achieve urgent change, whether that be through joining and supporting the climate strikes or through engaging with CEOs of some of the world’s largest companies to set more ambitious targets for a global transition to cleaner energy solutions.

We would urge you to join us in calling on our political, business and civil society leaders truly to meet the emergency and show the UK as a world leader in the fight against it. The alternative is to give up while we still have a chance.

Lucian J. Hudson, Chair, Earthwatch Europe, and Peter Hudson, writer on the environment and climate campaigner, are working on a publication aimed to bring together the main constituents of sustainable political change.