Breaking down the science: why FreshWater Watch is an important tool

Human activities seriously damage rivers, streams, ponds and other waterbodies. Farming and sewage are the biggest sources of water pollution, mostly in the form of nutrients, which upset the delicate balance of the water chemistry and affect what is able to live and thrive there. We need to understand how and where pollution is entering our waterbodies to allow us to develop plans to manage and protect them. 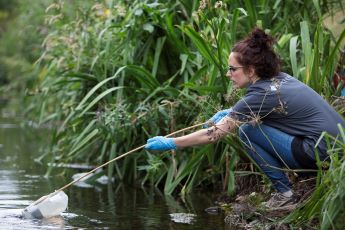 Collecting the data to help answer these questions is expensive and time consuming. – but with the help of volunteers, known as citizen scientists, large quantities of data can be gathered across a large area, which can help us to understand the issues across both local and global scales, and react accordingly.

Our Freshwater Research Assistant, Kes, summarises the key findings and important take aways from the journal.

How citizen scientists can enrich freshwater science as sensors, collaborators, and co-creators

Citizen scientists can collect high-quality data, over large scales, which can be comparable to data collected by professional scientists. To achieve this, you need to have clear, replicable methods, some form of quality control, and something in place to motivate your volunteers to join and stay with the project.

When using citizen scientists, getting volunteers to continue with the project after their initial training can be difficult, and a small percentage of the volunteers involved will produce the majority of the data. The factors identified here all increased the likelihood that someone would stay with the project and upload data. Building these elements into the project can help ensure its success.

Smaller and upstream waterbodies are very important for wildlife and drinking water, but are rarely monitored because of access and cost. Citizen scientists found that larger urban or agricultural areas had higher measurements for nutrients and that forests were better at preventing nutrients from entering water than grasslands.

Urban and agricultural areas are at higher risk of water pollution, this means we can focus our efforts on preventing pollution from coming in from these areas, and implement solutions where they are needed, such as building more forested areas, which were found to be better at retaining nutrients.

Turbidity is a measure of how much material is floating in the water: the lower the turbidity measurement, the clearer the water will be. Citizen Scientists measured water turbidity in 127 locations across Argentina, Brazil, Canada and China, to find out what causes increases in turbidity.

Higher cover of grassland was associated with higher levels of turbidity, probably because of grazing in these areas, which can increase inputs of sediment into the water. Low and high Gross Domestic Product (GDP)  were both related to increases in turbidity. This is likely because city areas usually have higher GDP and areas of farmland usually have low GDP but both are the biggest contributors of pollution into the water.

The participation of local communities is important for data collection, but also for helping to deliver better management plans, which consider a greater variety of issues.

Since 1982 volunteers have measured water quality in rain, fog and streams in a mountain area. This allowed scientists to document the drop in water quality due to acidification from acid rain, caused by polluted air. Following new directives on air quality, they were able to support the recovery of water quality and local wildlife. Forests made up of trees which shed their leaves annually (deciduous) appeared to reduce acidic water entering the streams, whereas forests with trees which keep their leaves all year round (evergreen) increased the issue.  Mixed deciduous forests appeared to reduce acidic water entering streams, but spruce forests increased the issue.

Why is this important

Mountainous catchments provide important water resources for lowland users, but are often not included in monitoring and management. Understanding how they react to human activity helps us to come up with plans to protect these resources.

This study looked at an area of culturally and environmentally important wetland on the outskirts of a growing city, and how different management of the surrounding land affected water quality within the wetland area, through the dry and rainy seasons.

Near low-impact activities (eco-farming areas and areas with little human impact) nutrient levels were low, but other water quality measurements, such as pH and oxygen, were not at recommended levels. This may be due to the low flow and depth of the canal areas measured. Measurements did vary somewhat between the two seasons.

Management (such as dredging of canal areas) could improve water quality, in the areas near low impact activities. For other areas, pollution being brought in by sewage and farming would need to be minimized first.

The spatial and temporal variation of water quality at a community garden site in an urban setting: citizen science in action

In a community allotment in London, members were concerned about contamination to their produce. A citizen scientist monitored the water quality over 2 years.

Contaminants from local sources were not found, although manure stored locally did affect some of the water sources used in the community garden.

Why is this important