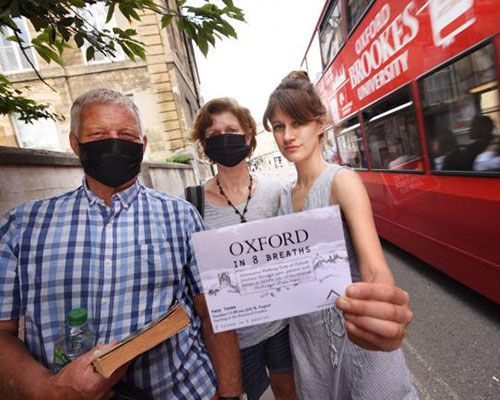 Air pollution causes up to 36,000 early deaths a year in the UK alone.

Every year World Environment Day chooses a theme that will draw attention to an environmental issue. This year the focus is Air Pollution.

Air connects us all, it is an invisible yet essential aspect to life, shared by every living creature. It is constantly entering our bodies yet we continue to pollute and degrade it.

Two years ago, our Learning Manager, Kat McGavin, along with fellow master’s student, Mariana Galán, took Oxford on an interactive journey through time and air. Structured as a conventional walking tour, Oxford in Eight Breaths encouraged its participants to take eight breaths in eight different places around the city, to really think about what it was they were constantly and inadvertently consuming. The guides also used lumps of coal to help participants understand the strain that this unseen entity can have on individual health and on the environment. For each particularly polluting period, another lump of coal was passed on resulting in the last person having to deal with a dirty, heavy and unpleasant handful.

Air pollution isn’t a new problem, in fact during the 1970’s the UK was known as the Dirty Man of Europe, with coal-fired power stations causing acid rain. Since then, we’ve seen countless campaigns and warnings about the pollution we cause and consume in our day-to-day lives, and although overall there has been some improvement, a lot of action is still required. In March this year, a study found that air pollution was responsible for more deaths than smoking.

The effects of air pollution are not only catastrophic to human health, with children fairing the worst, they also play a massive part in the climate crisis we are in. Carbon dioxide, associated with cars, planes, power plants, and other human activities that involve the burning of fossil fuels is the most common of the greenhouse gases. These trap heat in the atmosphere and contribute to the global heating.

Oxfordshire has a notoriously bad quality of air, something, which two years after the tour, is still an issue. Earlier in 2019 a report, commissioned by Oxford Friends of the Earth, showed 22 Oxfordshire sites that still breached the annual Air Quality Objective for Nitrogen Dioxide (NO2) levels. The city council has now published proposals for a Zero Emission Zone in the city centre. Starting in 2020 there will be restrictions applied to some vehicles and journey types, which will be increased gradually to all vehicles in the following years to create a largely transport emissions-free city centre by 2035.

Reflecting on Oxford in Eight Breaths now, Kat acknowledged that what they were saying was nothing new, but by confronting people in such a visceral way helped participants to really gauge the horrors surrounding them and pledge to make changes in their own lives. We need to keep making noise about Air Pollution and keep it in the public consciousness, otherwise the vital change we need will not happen.

This World Environment Day, will you make a pledge to help combat air pollution?