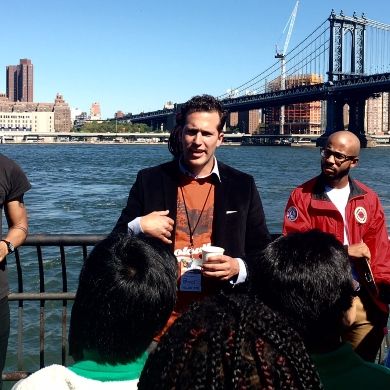 In 2012, when HSBC Senior Manager Peter Tavolacci took part in the Earthwatch/HSBC sustainable coffee farming programme in Costa Rica, he felt as if he were following in his father’s footsteps.

“My dad, when he was alive, used to travel to Central and South America, often to sample and purchase coffee for the US from these same types of local cooperatives that we were helping,” he explains. “I felt like I was walking in his footsteps and helping humankind at the same time.”

Interested in the environment from a young age, Peter charts his interest back to being in the Boy Scouts, where he was taught to leave nature better than how he found it. When he joined HSBC in 2004, he was immediately engaged in their sustainability programmes, and managed to earn a place on an Investing in Nature project that focused on water use and protection in Samburu, Kenya.

“We looked at how to capture water and keep it clean for the local tribes that use the scarce sources for everything, from drinking to cleaning, to feeding their animals,” says Peter. “I also helped a different scientist in the Lewa Wildlife Conservancy to save local wildlife by exploring the impact of property fencing on migration patterns."

Peter continued to invest in climate projects throughout his career and in 2013 he became involved in FreshWater Watch, getting certified as a Citizen Science Leader, and then measuring the quality of fresh water in his native New York City. He also supported other colleagues to do the same, among other community initiatives and was even named global runner up ‘Citizen Scientist of the Year’.

Moving to the UK in 2017, he undertook the Sustainability Leadership Programme and helped scientists at Kew Gardens, the Royal Botanical Gardens in London.

“I am proud that I work at a company that cares about the environment and giving back to community – it’s in HSBC’s DNA and it’s in my DNA, so a great match for me,” says Peter. “They give us the freedom to move on our ideas, promote awareness, impact real change and help others do the same. I will always be grateful for my experiences with Earthwatch.”