Last month more than 300 volunteers across the Thames Valley took part in our eighth WaterBlitz! The water samples help to reveal the state of pollution in local rivers, streams, lakes and pond, and have now been published in our WaterBlitz report.

Analysis of the samples collected shows that, whilst over the last four years there has been a significant decrease in the proportion of waterbodies in the Thames Valley with high levels of phosphate, levels of nitrate have remained high with no signs of improvement.

These nutrients can enter waterbodies from a variety of sources, but by far the most common are runoff from fertilised farmlands, which contains nitrates, and domestic sewage which contains phosphates. Pollution from these two nutrients is a particular problem in the Thames catchment, where dense urban populations and intensive farming dominate the landscape.

An excess of these nutrients can cause algae and certain species of plants to grow very quickly. These plants and algal blooms can outcompete other plants for resources such as light, leading to a reduction in biodiversity.  Algal blooms and their decay also reduce the amount of oxygen present in the water - in extreme cases, this leads fish and invertebrates to suffocate. 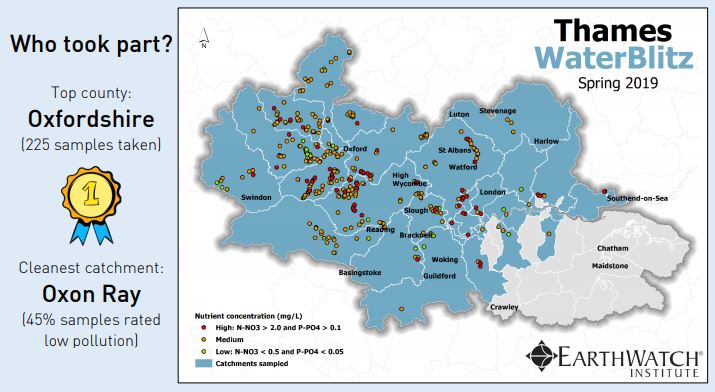 Stephen Parkinson, Researcher at Earthwatch says: “Thanks to WaterBlitz volunteers, we are building a much more detailed picture of water quality in the Thames Valley.  Rivers, streams, lakes, and ponds provide numerous important benefits, including drinking water, homes for wildlife, and recreation such as angling.  However, these waterbodies face increasing threats from development as well as pollution from fertilisers applied to fields, human waste, and industrial pollution.  It is important to monitor these sources of pollution, so that appropriate action can be taken where it is needed most.”

Volunteers also recorded litter at nearly 13% of sites. Litter in ponds, lakes, rivers, and wetlands is not only detrimental to animals using the water, but can also easily find its way to the ocean, where it can remain for hundreds of years.

Parkinson adds: “As awareness of the problem of plastic pollution continues to grow, we hope to see a reduction in litter.  Earthwatch has been leading research in freshwater plastics and recently released a report, Plastic Rivers, on the top 10 plastics found in European rivers along with the top actions people can take to reduce plastic pollution.”

You can find a full copy of this spring’s WaterBlitz results here.