GUEST BLOG: One man's mission to understand his local water

Written by Elizabeth Hunston on 20 August 2019. Posted in Blog

In early 2016, one of our current citizen scientists, John Pratt, sought advice from the UK’s national Environment Agency to explain why his local River Evenlode had turned increasingly murky in the summer months over the 27-year period that he had been fishing there. John decided to do something about what he saw, and has written about his experiences. 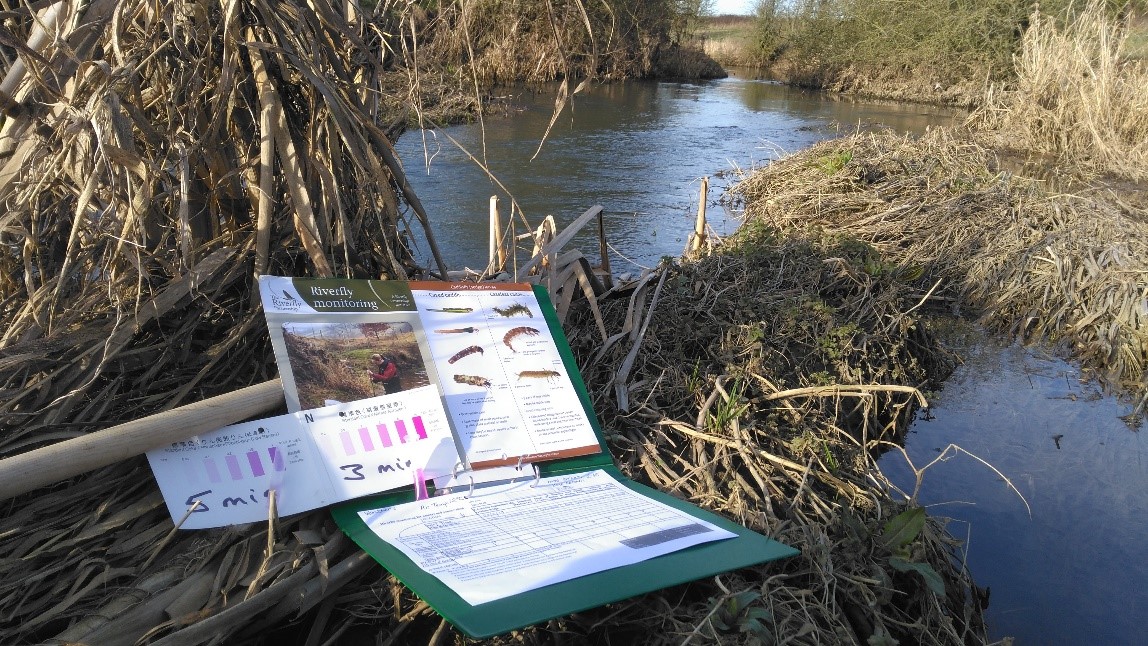 In 2016, I was provided with official statistics that demonstrated all was not well with the River Evenlode, and that on official chemical and biological measures set under the EU Water Framework Directive (WFD), the river was largely achieving only moderate status; near its confluence with the Thames it was of poor status. Higher up the catchment near Moreton-in-Marsh there had even been a history of low dissolved oxygen, which poses a significant risk to invertebrates and fish living in the river. Although the health of the main river remains questionable, some of my work has demonstrated that streams flowing through farmland and untouched by sewage treatment outfalls remain in a good ecological state and are perfectly crystalline during the low flows of summer. These small streams are not routinely monitored by the Environment Agency, so my research is providing valuable information about the potential for the river to achieve good status in areas that are less impacted by nutrient pollution. 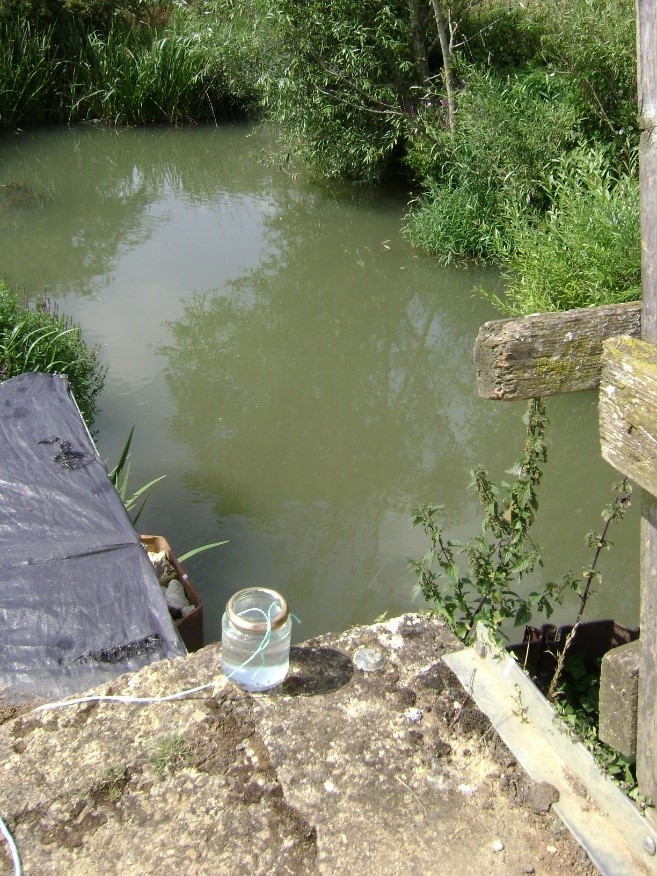 Murky water in the River Evenlode in 2016

In the spring of 2016 I joined Wild Oxfordshire and the Evenlode Catchment Partnership in taking part in Earthwatch Europe’s FreshWater Watch initiative to monitor nitrate and phosphate levels under the twice-yearly Thames WaterBlitz. I gathered samples from a number of sites in the catchment but felt there was a need to increase frequency to try to explore whether chemical concentrations changed significantly across varying seasonal levels of river flow. The outcome of this has been a reduction in the number of sites monitored to just five, but an increase in sampling frequency to once every two months year-round – this includes capture of data during the typical low-flow month of August when turbidity can be especially high. This is not natural mineral turbidity; it is algal bloom, likely caused by excess phosphates and nitrates in the water. This data set extends back to October 2017 and continues to be supplemented. I have recently replaced my logging of visual assessments of turbidity with optical measures using the Secchi Tube advocated by FreshWater Watch. 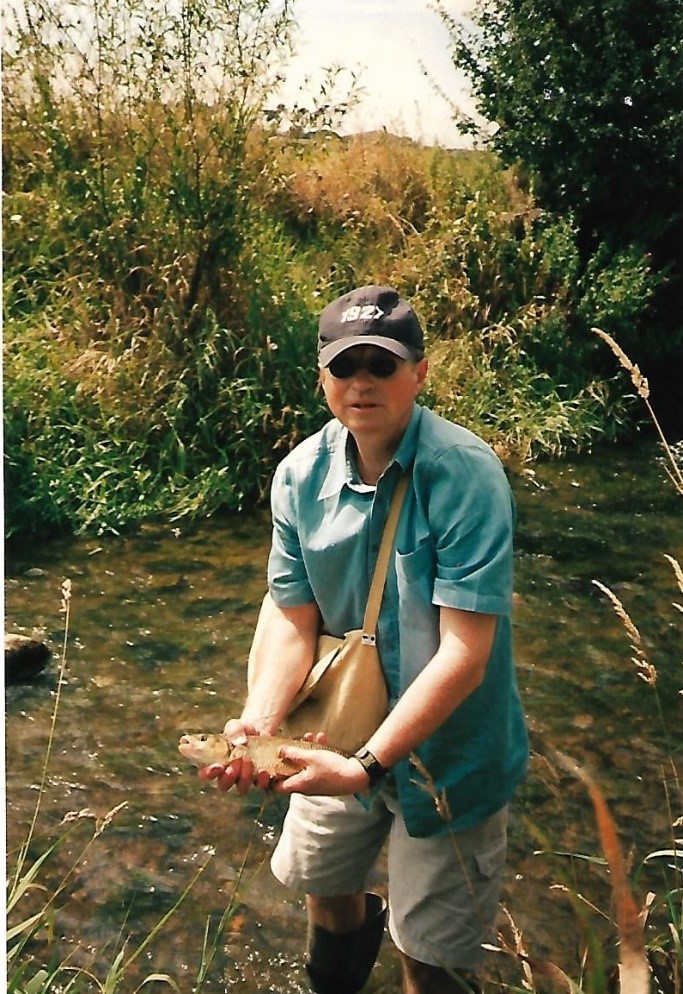 A photograph of John's friend on the River Evenlode in happier times (August 2000), which shows that the river was once crystalline and had good weed growth in the river bed.

In 2019, as part of its Smarter Catchments initiative, specifically around the Evenlode, the local water company Thames Water made arrangements with FreshWater Watch and Wild Oxfordshire to support the intensification of chemical sampling by citizen scientists across West Oxfordshire. Among other opportunities that this enables, it may provide comparison of the status of the River Evenlode with its main tributary, the River Glyme, which already benefits from WFD measures to restrict phosphates entering the river system from three (out of a total of four) sewage works to no more than 1 mg/l. While they serve a population of over 20,000, none of the 12 sewage works on the Evenlode above the confluence with the Glyme is capped for phosphate discharge. 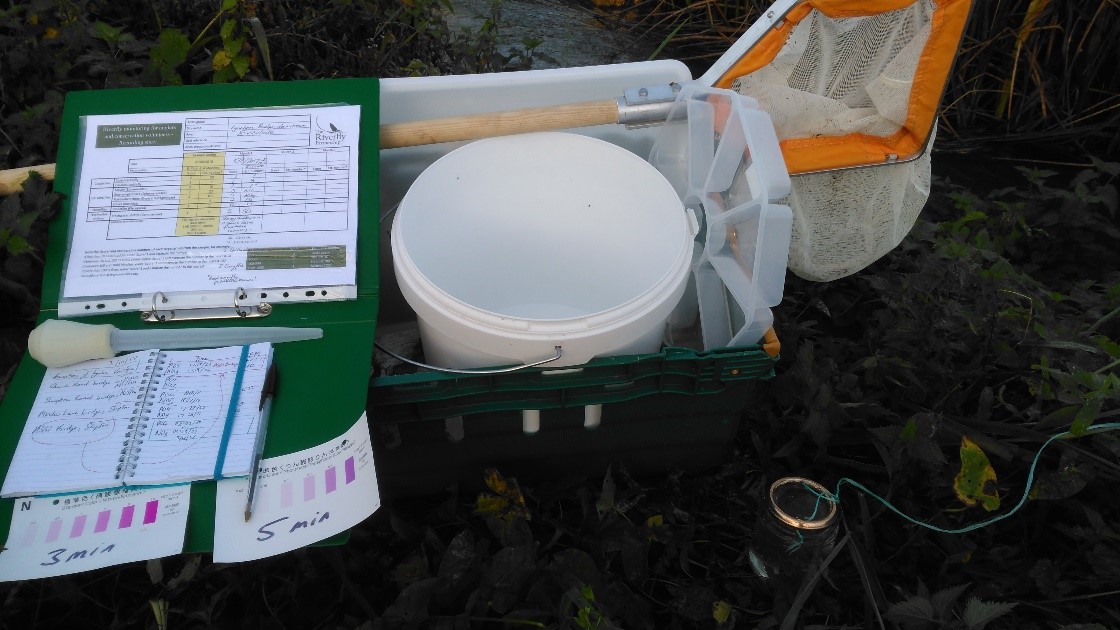 In the spring of 2017 I took part in Riverfly Monitoring training at a workshop organised locally by The Wychwood Project, Wild Oxfordshire and the Riverfly Partnership. This equipped me with the skills and materials to monitor invertebrates at the same time as undertaking chemical sampling. This is on the same bimonthly frequency on four sites where I am able to wade the watercourse. My invertebrates data collection and logging extends back to October 2017. Under this system, caddisfly larvae, upwinged fly nymphs, stonefly nymphs and shrimps are monitored from kick-sampling into a specialised durable hand net. The captured data is uploaded to the Riverfly Partnership website. is a perfect complement to FreshWater Watch because riverflies provide an additional indicator of excess nutrients. FreshWater Watch is now part of the Riverfly Plus group of citizen science monitoring initiatives for rivers in the UK.

The phosphate levels otherwise detected in the stream and its tributaries (upstream of the STW) are well within WFD target limits.

Thoughts for the future

Ideally, I would like to see the River Evenlode given the same concern for phosphate ‘capping’ as has already been instituted on the River Glyme and to be able to monitor impact.